Étienne Bacrot (French pronunciation: ​; born January 22, 1983 in Lille, Nord) is a French chess grandmaster and currently ranked No. 2 in France.

He started playing at age 4; by 10, young Bacrot was already winning junior competitions and in 1996, at 13 years of age, he won against Vasily Smyslov. He became a Grandmaster in March 1997 at the age of 14 years and 2 months, making him the youngest person to that date to have held the title (later in December, Ruslan Ponomariov took his record).

Bacrot scored 6/8 in the 37th Chess Olympiad in 2006 against opponents averaging 2640, gaining 13 Elo points. This earned him the bronze medal for the third best individual performance in the Olympiad. One of his notable wins was against top American grandmaster Gata Kamsky.

Bacrot served as one of the four advisors to the world team in the 1999 Kasparov versus the World event.

He has a son, Alexandre, with Nathalie Bonnafous. 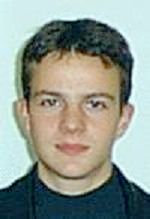