He graduated from the University of Texas in Dallas with a Master's degree in Arts and Technology, Video Game Design.

Ramírez started playing chess at the age of four after watching the movie "Searching for Bobby Fischer" and was taught the game by his father, Jorge Ramírez. In 1998 Ramírez won the gold medal in the Pan American Under-10 Chess Championship held in Florianopolis and this achievement earned him the title of FIDE Master. He was awarded the title of International Master at the age of 13 by scoring 6½ points in the Sub-zonal Tournament held in Managua, Nicaragua in November 2001.

In 2002, he played for the Costa Rican team on board three at the 35th Chess Olympiad, held in Bled Slovenia, scoring 9/14 points; he drew games among others with Russian Grandmaster Alexander Morozevich. 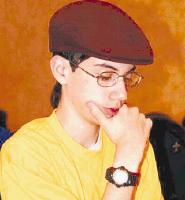 Ramírez gained his first grandmaster norm at the 2003 Capablanca Memorial in Havana, Cuba, scoring 8/11. The second norm was obtained in in August 2003 at the Zonal Tournament 2.3 in Guayaquil, Ecuador, where he tied for first place with Lenier Dominguez. This result earned Ramírez a spot in the FIDE World Chess Championship 2004, where he was eliminated in the first round by the eventual winner, Rustam Kasimdzhanov.

He achieved his third norm at the age of 15 by scoring 7½/10 in the Los Inmortales Tournament in Santo Domingo, Dominican Republic, in November 2003. FIDE awarded Ramírez the grandmaster title in 2004, making him the first and only chess grandmaster from the centro-American area.

He took part in the 2004 Chess Olympiad in Calvià playing for Costa Rica on top board.

In 2008, Ramírez took first place in the Morelia Open and played on board one for the Costa Rican team at the 38th Chess Olympiad.

He won the 2010 US Chess Open in Irvine, California. In 2011 he transferred to the United States Chess Federation.

In May 2013, Ramirez tied for first with Gata Kamsky in the U.S. Chess Championship, after they both scored 6.5/9. Ramìrez was declared runner-up after the playoff, where he drew the two rapid games and lost the Armageddon game, in which he had 19 minutes and 45 seconds against Kamsky's 45 minutes. This result enabled him to qualify for the Chess World Cup 2013, where he was knocked out by Evgeny Tomashevsky in the first round, after the Armageddon tiebreaker. Ramirez finished equal first at the 2013 World Open with a score of 6.5/9.

He finished equal second (third on countback) in the 2014 Carlos Torre Repetto Memorial.