He was born in Tashkent, in the former Uzbek Soviet Socialist Republic. He is an ethnic Uzbek.

His best results include first in the 1998 Asian Chess Championship, second in the World Junior Chess Championship in 1999, first at Essen 2001, first at Pamplona 2002 (winning a blitz playoff against Victor Bologan after both had finished the main tournament on 3½/6), first with 8/9 at the HZ Chess Tournament 2003 in Vlissingen, joint first with Liviu Dieter Nisipeanu with 6/9 at Pune 2005, a bronze-medal winning 9½/12 performance on board one for his country at the 2000 Chess Olympiad and runner-up in the FIDE Chess World Cup in 2002 (losing to Viswanathan Anand in the final). He has played in the prestigious Wijk aan Zee tournament twice, but did not perform well either time: in 1999 he finished 11th of 14 with 5/13, in 2002 he finished 13th of 14 with 4½/13.

In the FIDE World Chess Championship 2004 in Tripoli, Libya, Kasimdzhanov unexpectedly made his way through to the final, winning mini-matches against Alejandro Ramírez, Ehsan Ghaem Maghami, Vasily Ivanchuk, Zoltán Almási, Alexander Grischuk and Veselin Topalov to meet Michael Adams to play for the title and the right to face world number one Garry Kasparov in a match.

In the final six-game match of the Championship, both players won two games, making a tie-break of rapid games necessary. Kasimdzhanov won the first game with black, after having been in a difficult position. By drawing the second game he became the new FIDE champion. 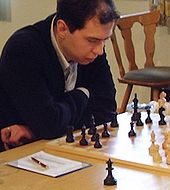 Kasimdzhanov's 2004 championship victory earned him an invitation to the eight-player FIDE World Chess Championship 2005, where he tied with Michael Adams for 6th-7th place.

The 2004 championship also earned him one of sixteen places in the Candidates Tournament for the FIDE World Chess Championship 2007. His first round opponent was Boris Gelfand. In their match, all six regular games were drawn. Then Gelfand won the rapid tie-break 2½-½, eliminating Kasimdzhanov from the tournament.

On June 23, 2005, in the ABC Times Square studios, the AI Accoona Toolbar driven by a Fritz 9 prototype engine, drew against him.

He made his first appearance at Linares in 2005, finishing tied last with 4/12. In 2006, Kasimdzhanov won the knockout Corsica Masters tournament.

He was a second for ex-World Champion Viswanathan Anand, having worked with Anand in preparation for and during his successful World Chess Championship title defences in October 2008 against Vladimir Kramnik, April-May 2010 against Veselin Topalov and in May 2012 against Boris Gelfand.

Kasimdzhanov won gold in the individual men's rapid event at the 2010 Asian Games. In the following year he won the inaugural Central Asia Chess Cup in Tashkent.

In 2015 he won the Highlander Cup, a rapid knockout tournament, at the Global Chess Festival, that took place in Budapest and was organized by Judit Polgar.