Viktor (Viorel) Bologan (born 14 December 1971) is a Moldovan chess grandmaster. His major accomplishment has been winning the Dortmund Sparkassen 2003, ahead of higher-rated and well-known players such as Vladimir Kramnik, Viswanathan Anand, and Peter Leko.

Bologan won the first two editions of the Karpov Poikovsky Tournament, in 2000 and 2001. He tied for first in the same tournament in 2005 and 2015. In 2003 he won also the Aeroflot Open, one of the largest open tournaments with 150 grandmasters participating. He won the 2005 Canadian Open Chess Championship. In May 2010, he tied for 1st-2nd with Zahar Efimenko in the 40th Bosna International tournament in Sarajevo. 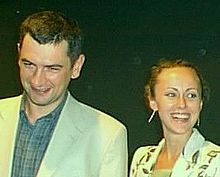 Bologan with his wife at Dortmund 2003 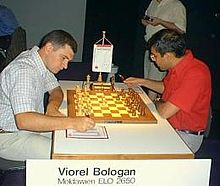