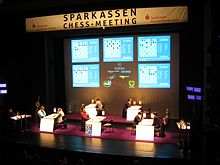 The Dortmund Sparkassen Chess Meeting is an elite chess tournament held every summer in Dortmund, Germany. Dortmund is an invite-only event, with the exception that one slot at Dortmund is awarded to the winner of the annual Aeroflot Open in Moscow.

The tournament is usually played in a round-robin or double round-robin format. However, it took the form of a series of heads-up matches in 2002 and 2004. The 2002 Dortmund event was also notable in that it served as the Candidates Tournament for the Classical World Chess Championship 2004. Péter Lékó won, defeating Veselin Topalov in the finals.