Shakhriyar Mamedyarov was born on April 12, 1985 in Sumgait, Azerbaijan.

In 2003 he won the World Junior Chess Championship. He repeated his victory in 2005 (thus becoming the only two-time champion), achieving a 2953 performance rating after eight rounds. This gained him an invitation to the Essent Tournament 2006 in Hoogeveen, and by winning this one and the 2007 edition, Mamedyarov achieved world fame.

In 2005 Mamedyarov competed at the European Club Cup and had the second highest performance rating (2,913) among all of the participants (Vassily Ivanchuk had the highest).

Mamedyarov attained joint first place at the Aeroflot Open in Moscow in February 2006, with a score of 6½/9. In October 2006, he won the closed Essent Chess Tournament in Hoogeveen with 4½/6, beating Judit Polgár on Sonneborn-Berger.

At the Chess World Cup 2007 Mamedyarov reached the third round where he was knocked out by Ivan Cheparinov.

He was the best player at the World Team Chess Championships 2009.

In 2010, he tied for first place with Vladimir Kramnik and Gata Kamsky at the President's Cup in Baku, followed by joint first in the Tal Memorial.

In May 2011, Mamedyarov was the tournament organisers' nominee, qualifying him for the Candidates tournament for the World Chess Championship 2012, where he lost to Boris Gelfand in the quarterfinal.

In November 2014, he won the Tal Memorial for the second time in his career.

Mamedyarov has an aggressive style of play. He is known for experimenting with unusual openings, such as the Alekhine Defence and the Budapest Gambit. 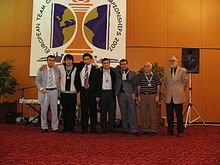 Mamedyarov caused controversy during the Aeroflot Open tournament that took place in Moscow between 17 and 26 February 2009. After losing to lower rated Igor Kurnosov in 21 moves, he voiced suspicions of cheating behaviour on the part of his Russian opponent, citing Kurnosov's wanderings outside the playing hall after each move, the refusal to agree to a draw on move 14, and the unusually strong moves played by a 2600+ GM. The arbiters were unable to discover any evidence implicating Kurnosov and Mamedyarov withdrew from the tournament in protest.

At the 2012 European Individual Championship in Plovdiv, Bulgaria, he was involved in two controversial incidents. In round 8, he was forfeited against the Georgian IM Shota Azaladze for arriving less than 2 minutes late (10 seconds late, according to Mamedyarov). In the next round, he agreed a draw on move 19 against the Spanish IM Alvar Alonso Rossell. The tournament rules forbade draws by agreement before move 40, so the arbiters ruled the game a double loss by forfeit. Another Azeri GM, Eltaj Safarli, and his opponent, Tal Baron, were also double defaulted for an early draw. Both Azeri GM's withdrew from the tournament in protest.

His personal trainer is his father, who is a former boxer. Mamedyarov has two sisters, Zeinab Mamedyarova and Turkan Mamedyarova, who are Woman Grandmasters.