Wesley Barbasa So (born October 9, 1993 in Bacoor, Philippines) is a Filipino chess grandmaster representing the United States. So is a former chess prodigy.

In October 2008, he became the youngest player to pass 2600 Elo rating, breaking the record held by Magnus Carlsen. This record was later broken by the Chinese prodigy Wei Yi.

In early 2013, So passed the "elite" 2700 rating and in February 2015 he entered the World top 10 after winning the Millionaire Chess Open and tying for second place at the 2015 Tata Steel Chess Tournament.

So won Group C in the 2009 edition of the Corus Chess Tournament and is a three-time Philippines Chess Champion. In November 2015, he won the Bilbao Chess Masters Final tournament.

So was born in Bacoor, Cavite in 1993 to William and Eleanor So, both accountants. So attended the Jesus Good Shepherd School and went on to St. Francis of Assisi College in Bacoor.

He was aged six when his father taught him to play chess and nine when he began competing in junior tournaments.

So took first place at the 2003 Philippine National Chess Championships in the U-10s section.

So made his tournament debut at the Nice International Open in August 2005, finishing in sixteenth place (from 159) with 4/7. He also completed three International Master norms in the space of four months, becoming the youngest Filipino to achieve that status after scoring 5/9 at the Dubai Open, 5.5/9 at the San Marino Open and 6.5/11 at the Dato Arthur Tan Malaysia Open. During this period, So made his first Olympiad appearance on second reserve board at the 37th Chess Olympiad held in Turin in 2006.

In May 2007, he went on to become National Junior Chess Champion. So got his second GM norm by scoring 7.5/13 at the 2007 World Junior Chess Championship in Yerevan. He achieved his third and final Grandmaster norm in December 8, 2007 at the Pichay Cup International Open (Manila, Philippines), thus becoming the youngest Filipino grandmaster at the age of 14 and the seventh youngest to reach the title.

January 2008 saw So finish fourth with 7/11 at the ASEAN Chess Circuit event held in Tarakan, Indonesia. In April 2008 So shared first place at the Dubai Open, scoring 7/9. He also finished in third place with 7/9 at a blitz tournament held during the rest day. So then defeated Susanto Megaranto 4-2 in a six-game match as part of the JAPFA Chess Festival held in Jakarta, won the "Battle of Grandmasters tournament" with 8½/11 (+6 =5 -0) in Manila, came tenth with 7.5/11 in the Philippines Open followed immediately with second place at the Subic Open with 6.5/9. 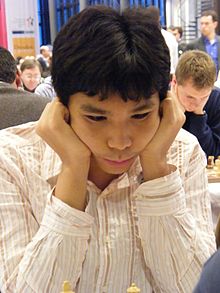 Wesley So at Dresden Olympiad 2008

In July 2008, So came second with 12.5/17 in a tournament to decide the team for the 2008 38th Chess Olympiad, followed by sharing eighth place at the World Juniors Championship held in Gaziantep, Turkey. He shared second with Zurab Azmaiparashvili scoring 6.5/9 at the Vietnam Open but finished well back at the Arroyo Cup in sixteenth place. During the previous 3-month rating period So completed 69 rated games.

After competing in the Asian Club Cup, So made his first appearance at a major chess tournament by winning the Corus Group C in January 2009, a point ahead of Anish Giri and Tiger Hillarp Persson with a score of 9.5/13, earning a spot in Group B the next year. He scored 5/9 and shared 17th place at the strong Aeroflot Open held in Moscow. He showed his strength against home opposition scoring 9/11 at the Dapitan City Battle of GMs, but found it difficult at the Asian Continental Championships in Subic scoring 6.5/11 and sharing 18th place. So won a seat in the 2009 Chess World Cup by finishing second at the Zonal Championship held in July 2009 in Ho Chi Minh City, Vietnam. After competing in the Chinese Chess League, So shared fourth place at the SPICE Cup Group A with a solid 4.5/10.

At the age of 16, So became one of the stories of the 2009 Chess World Cup held in Khanty-Mansiysk after progressing to the fourth round before being knocked out by Vladimir Malakhov after rapid tiebreaks. He defeated Gadir Guseinov after rapid tiebreaks then defeated the experienced Vassily Ivanchuk and Gata Kamsky. This was followed by sharing fourth place at the Corus Chess Group B in early 2010 with Erwin l'Ami scoring 7.5/13 and sharing seventh place with 5.5/9 at the Aeroflot Open. Sharing second place with 6.5/9 at the Asian Continental Championships in April earned him a spot in the Chess World Cup 2011 and he secured a second Philippine Chess Championship.

As So's playing strength and rating increased, so did the number of invites to high-level events. So initially led the strong Biel tournament before drifting back to share fifth place with 4.5/9. Three weeks later, So held his own in the last NH "Experience vs Rising Stars" Match (played under Scheveningen match rules) scoring 4.5/10 for the "Rising Stars" team. So took part in the 39th Chess Olympiad and placed fourth, scoring 5.5/10 at the 2010 Spice Cup, before the Asian Games. 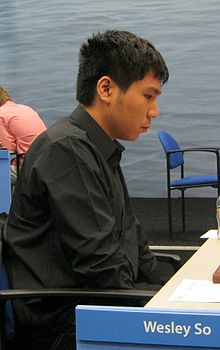 So tied for fourth place at Tata Steel (formerly Corus) Group B but withdrew from the Aeroflot Open, held soon after, citing exhaustion from the previous event. In July 2011 he won the Philippine Chess Championship for a third time. So's rating would hover over the coming year with a solid performance at the strong AAI International Tournament in New Delhi among performances typical for his rating.

In August 2012, So began full-time study at Webster University in St. Louis under the SPICE program, founded by former women's world champion Susan Polgar. In September 2012, So found success in first place at the Quebec International, scoring 7.5/9, half a point ahead of Lazaro Bruzon and at the 40th Chess Olympiad drew against numerous top-level players including Levon Aronian, who described So as a "talented player from a country with a great chess culture".

So came second in the Zonal 3.3 Championship in Tagaytay, Philippines earning a place in the Chess World Cup 2013 and shared first place with Pavel Eljanov and Bassem Amin at the Reykjavik Open. In doing so he breached the 2700 Elo mark, considered to be the level of an elite player and placed him 50th in the World. So won also gold at the 2013 Summer Universiade in Kazan, Russia, the first such medal for the Philippines, after a play off match with Zaven Andriasian. After defeating Alexander Ipatov in the first round of the Chess World Cup, he was knocked out by eventual semi-finalist Evgeny Tomashevsky. In October 2013, So won the Unive Crown Group scoring 4.5/6.

So tied for fourth with Fabiano Caruana and Lenier Dominguez at the 2014 Tata Steel Chess Tournament Group A scoring 6/11. He also won the 49th Capablanca Memorial tournament, held in Havana, a point clear of Lazaro Bruzon, soon after winning the ACP Golden Classic tournament in Bergamo, Italy with a score of 4.5/6, a point ahead of Baadur Jobava. This string of tournaments propelled So to 12th in the FIDE World Rankings.

So's transfer to the United States Chess Federation was confirmed in the November 2014 rating list. Soon after, he left Webster University to focus full-time on chess. He moved to Minnetonka, Minnesota to live with his adopted parents, Lotis Key and her husband, Renato Kabigting, both chess enthusiasts.

He won the Millionaire Chess Tournament held in Las Vegas in October 2014 scoring 8.5/13 and shared second place at the Tata Steel Masters in January 2015. In June 2015, in the Dortmund Sparkassen Chess Tournament, he came in second, behind the winner Fabiano Caruana.

In November 2015, So won the 2015 Bilbao Chess Masters Final tournament. He defeated Grandmaster Ding Liren in Round 1, drew the remaining 5 games, and won in the tiebreaks against Grandmaster Anish Giri.

So has competed in four Chess Olympiads (representing the Philippines), making his debut at 12 years old at the Turin Olympiad in 2006:

As a young player, So's aggressive and tactical style of play caught the attention of a former Philippine chess champion, International Master Rodolfo Tan Cardoso. Cardoso said of So:

"The young lad...would sacrifice a queen or any other pieces in his arsenal to get a winning attack....He cannot afford decent training given by well known GM-coaches and has to rely on his pure talent...before competing."

So commented during an interview with Alina l'Ami in 2009:

"So far I play aggressively. I would like to play a solid game with a solid opening. This is what I want. I think my style is close to Vishy Anand. Of course we have different level."

So has also said that his favourite game was his win against Ni Hua in the 2008 Chess Olympiad, which was his first win against a 2700-rated opponent.

During So's tournament victory at Bad Wiessee in 2006, he earned a creativity award in the Russian magazine e3e5 for the following game, where he won in spectacular fashion: