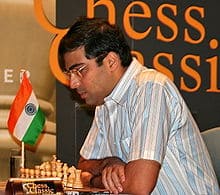 Viswanathan Anand of India, winner of the World Chess Championship 2007

The World Chess Championship 2007 was held in Mexico City, from 12 September 2007 to 30 September 2007 to decide the world champion in the board game chess. It was an eight-player, double round robin tournament.

Viswanathan Anand of India won the tournament and the title of World Chess Champion. His winning score was 9 points out of 14, with a total of four wins and 10 draws, and Anand was the only undefeated player in the tournament.

In 2006, FIDE announced the World Chess Championship 2006, to reunify the world chess championship. Because the organization of the 2007 tournament was largely in place, conditions of that match included:

Kramnik won the 2006 match. In June 2007, Kramnik confirmed that he recognized the 2007 tournament as the world championship, while expressing a personal preference for the championship to be decided by a match.

Four further players qualified through the 2005-07 qualification process, which consisted of three stages:

The 2005 World Cup, held in Khanty-Mansiysk, Russia, was the qualification for the Candidates tournament. It was a knock-out tournament of mini-matches, in the style of the FIDE World Chess Championships 1998-2004. However, once 16 players were left, they were no longer immediately eliminated, but played further mini-matches to establish places 1 through 16.

The top finishers were:

The top 10 qualified for the Candidates Tournament. Since Bacrot was already qualified on rating, 11th placed Malakhov also qualified.

One place in the Candidates Tournament was reserved for 2004 FIDE World Champion Kasimdzhanov, who had also finished 6th in the 2005 championship tournament. Three places went to the other players finishing 5th-8th in the 2005 tournament: Leko, Adams, and Polgár. Two places were then awarded to the two highest rated players (average of July 2004 and January 2005 ratings) who had not already qualified: Shirov and Bacrot. The remaining ten places went to the highest finishers at the 2005 World Cup who had not otherwise qualified (see above).

The Candidates tournament, held in Elista, Kalmykia, Russia, from 26 May to 14 June 2007, was originally to consist of a two-round knockout with one player qualifying from each quarter of the draw. In September 2006, FIDE proposed that these players play a 16 player, single round-robin tournament instead. However this decision was reversed, and the tournament consisted of two rounds of matches as originally planned.

World Cup winner Aronian was top seed, with the remaining players seeded in rating order according to the January 2006 ratings list. In the second round, the 1v16 winner played the 8v9 winner, 2v15 winner versus 7v10 winner, and so on.

Matches were best of six games, at normal time controls (40/120, then 20/60, then 15 minutes + 30 seconds per move). Where matches were tied after six games, tie breaks were played on the seventh day:

The four second round winners qualified for the championship tournament.

Numbers in parentheses indicate players' scores prior to the round.

For players who finished level on points, the following tie-breakers were applied (in order of precedence): results of games between tied players, total number of wins, Neustadtl score.