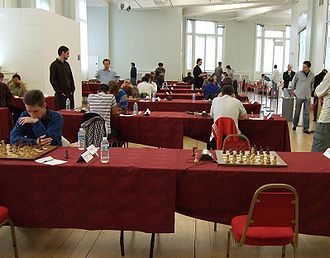 The EU Individual Open Championship was first contested in Cork, Ireland in 2005, under the auspices of organising body, the European Chess Union (ECU). The event is open to members of chess federations within the European Union. Exceptionally, at the discretion of the organisers, guest players have also been allowed to compete; for example, when the host nation has non-EU neighbours.

The fourth championship, held in Liverpool in 2008, was its last edition.

The tournament has been held annually between 2005 and 2008, sometimes in conjunction with the celebrations of cities awarded European Capital of Culture status. Financial backing has not been consistently high, but in the case of Liverpool 2008, the prize fund totalled £30,000, which was large enough to attract many of the EU's strongest players.

The events were run on an inclusive format, open to a range of players of varying standard, typically from Elo 1600 to 2700 or more, but unrated players are also eligible to play. Substantial prize money is awarded not just to the overall top finishers, but also to the highest finishing women and junior players. Additional prizes go to those showing the best rating improvement over the course of the tournament.

The time limits for play tended not to follow the FIDE format, but more closely resemble classical time limits, to give some assistance to players in the endgame phase.

The first European Union Individual Open Championship formed part of the programme of events celebrating Cork City's status as European Capital of Culture for 2005. Played over ten rounds, the event took place 21 March - 3 April 2005 in the Ballroom Suite of the Gresham Metropole Hotel, MacCurtain Street, Cork, Ireland. There were one hundred and fifteen participants and Hungarian grandmaster Zoltan Gyimesi won the event on tie-break from Mateusz Bartel of Poland, who drew level on points in the final round. The highest placed woman player was IM Viktorija Čmilytė of Lithuania with 6½ points.

The second edition of the Championship took place at the World Museum, William Brown Street, Liverpool, England. Held between 6-15 September 2006, the tournament entry totalled eighty-four. Going into the final round, host nation grandmaster Nigel Short was the only leading player to win, defeating Mark Hebden to capture clear first place with 7½/10. The highest placed woman player was IM Dagne Ciuksyte of Lithuania on 6½ points, repeating the achievement of compatriot Cmilyte, in the previous year's event.

The third European Union Individual Open Championship took place June 15-24th 2007, in Arvier (Aosta Valley), Italy. There were one hundred and ten competitors and the tournament was open to the players of the twenty-seven countries of the European Union, plus four additional countries close to the host nation, these being Croatia, Montenegro, Serbia and Turkey. Croatian Nikola Sedlak took the contest on tie-break from local favourite Michele Godena, after both finished on 8/10. Godena was however awarded the Champion's title, due to Sedlak being a non-EU citizen. IM Cristina Foisor (ROM) was the top finishing woman player with 6½ points.

The fourth edition of the Championship saw a return to the venue of 2006 - Liverpool's World Museum. Held September 9-18th 2008, during the city's reign as European Capital of Culture, there were one hundred and forty participants, from twenty member states, competing for a record prize fund. The event was won by Jan Werle of the Netherlands, the best tournament success of his chess career to date. He drew with Maxime Vachier-Lagrave in the final round, while Michael Adams, a half point behind, settled for an early draw with Emanuel Berg, thereby securing a share of second place. The women's top spot was shared between Jovanka Houska, Yelena Dembo and Ketevan Arakhamia-Grant, all on 6 points.