In 1985, when she won the World Junior Chess Championship for Girls, held in Dobrna (and taking silver in Adelaide three years later). Very soon thereafter, she fulfilled the criteria for the Woman International Master title and this was awarded in 1986. Encouraged by these early successes, she quickly developed aspirations to become a Women's World Championship contender and in the course of the qualification cycles of the late eighties and early nineties, proved that she had the ability to compete at the top level. Second place behind Nana Ioseliani in her first Interzonal at Tuzla 1987 was an inspirational start, but she won the 1993 event in Jakarta and the 1995 event in Kishinev. Her performances in the respective Candidates Tournaments ruled out an opportunity to play for the world title.

She won the Women's Soviet Chess Championship in 1990.

Aside from world championship competitions, in 1990 she took first place at both the Biel Women's Open and Geneva (IM), then followed up by winning the Doeberl Cup in Canberra, Australia in 1991; the first woman to do so. Her participation at the Hastings Premier in 1993/94, where she finished ahead of six male grandmasters and defeated three of them on her way to a share of third place. In respect of women competitors at Hastings, the result was second only to that of Judit Polgár.

In the nineties she participated in the Veterans vs Ladies dance-themed tournaments where she defeated Borislav Ivkov, Vlastimil Hort, Vasily Smyslov and Mark Taimanov.

In 1996, she married Jonathan Grant, also a chess player, and they settled in Edinburgh, later giving birth to daughter Elena.

In team chess, Arakhamia debuted at Chess Olympiad at Novi Sad in 1990, representing the USSR Ladies team as first reserve and registering a perfect 12/12 score. With the Soviet and then Georgian Ladies Teams, she has won 9 Olympiad medal, and including two team and three individual gold medals. She has won medals at the European Team Chess Championships; a team gold at Pula in 1997 and team silver medals in 1992 and 2005.

Despite moving to the UK, Arakhamia continued to represent Georgia for many years, through membership of its national chess federation. She was the Georgian Ladies Champion in 1983, 1984 and 1990. In January 2008 however, she switched her registration to her adopted country.

Post-millennium, she has won a bronze medal at the Women's European Individual Championship at Warsaw in 2001. She was Scottish champion jointly with Paul Motwani in 2003 (the first ever woman to achieve the honour) and has participated at the British Championship, taking the Ladies' Champion titles of 2003, 2004, 2006 and 2007. In 2006 she finished just a half point behind overall Championship winner Jonathan Rowson.She concluded with a 4½/5 finish, including a win against Nick Pert in the last round. 2006 was also the year that her husband took first place in the Scottish Championship, making them the first ever husband-wife pair to win a full national championship. Also in 2006, at Batumi Georgia, she assisted the Australian squad by coaching their Under-10 Girls at the World Youth Chess Championship.

In 2007 she beat former U.S. Champion Hikaru Nakamura at Gibraltar Masters, in a 100-move first round encounter. Journalist John Saunders describes Arakhamia as the ideal role model - "her charming and dignified manner belies a tough, determined fighter at the board". At Philadelphia, while visiting her sister, she played the World Open and finished top woman. As the tournament was a qualifier for the MonRoi Women's Grand Prix, she earned a place in the Montreal finale, held just a few weeks later. There, she shared the lead after five rounds and finished in joint fourth place (Pia Cramling won). As part of the Liverpool European Capital of Culture festivities, she played in the United Kingdom vs China match and was top scorer for the UK with 4/6, although China won the match. 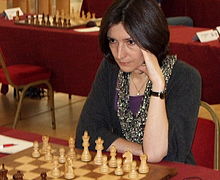 Arakhamia-Grant at the 2008 EU Championship

At the 2008 EU Individual Open Chess Championship in Liverpool, she shared the highest scoring woman prize with Jovanka Houska and Yelena Dembo. At the Olympiad in Dresden, she played for Scotland in the main event and completed her final grandmaster norm with victory in the final round. Having additionally met the 2500 Elo rating requirement in the January 2009 FIDE list, she was awarded the title in March 2009, making her Scotland's sixth grandmaster. In August 2009 Arakhamia-Grant won the Baltic Queen round-robin tournament in Saint Petersburg.

In July 2011 she won the Scottish Championship outright, finishing with the score of 7/9.

In league chess, Ketevan Arakhamia-Grant has played for OSC Baden-Baden in the Women's Bundesliga and for Georgian team Interplast Tbilisi in the European Club Cup. For the 2008/9 season, she represents Wood Green Hilsmark Kingfisher 1 in the British 4NCL.