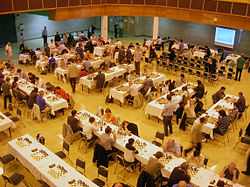 The British Chess Championship is organised by the English Chess Federation. There are separate championships for men and women. Since 1923 there have been sections for juniors, and since 1982 there has been an over-sixty championship. The championship venue usually changes every year and has been held in different locations in England, Scotland, Wales and once on the Isle of Man.

The championship was originally open to citizens of any Commonwealth country and has previously been won by Mir Sultan Khan (India) and Abe Yanofsky (Canada). After the Indian R. B. Ramesh finished first in 2002 and several other Indians took top prizes at the same event, many top Britons declined to compete in the 2003 championship. Following the victory of Indian Abhijit Kunte in 2003 and criticism that the British Championship was not serving the interests of British players, it was announced that starting in 2004 only British and Irish players would be eligible to take part. Since 2006 the Commonwealth Chess Championship has been organized on an annual basis.

These were the first large tournaments organised by the British Chess Association, international players were allowed to participate.

Ten amateur championships were held between 1886 and 1902, but they did not include the strongest players and were unrepresentative, especially in the earlier years.

The current championship series was begun by the British Chess Federation in 1904. The championship was not held in war years. It was also not held in 1919, 1922, 1927, and 1930 as major international events were then being held in England. José Raúl Capablanca won the 12th British Chess Congress at Hastings 1919 and the 15th BCC at London 1922, Alexander Alekhine won the 16th BCC at Portsmouth/Southsea 1923, Aron Nimzowitsch and Savielly Tartakower won at London 1927, and Edgard Colle won at Scarborough 1930. In 1939 the championship was also not held as the British team was in Buenos Aires for the 8th Chess Olympiad. In that time, Max Euwe won an international tournament at Bournemouth 1939, played during the BCC. The women's championship was held in most of those years.