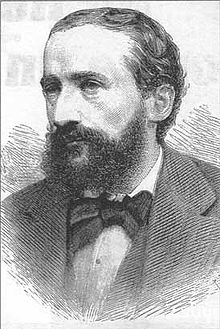 Johannes Zukertort, winner of the tournament

The London 1883 chess tournament was a strong chess tournament among most of the leading players of the day. It was won convincingly by Johannes Zukertort (22 points out of 26) ahead of Wilhelm Steinitz (with 19 points). Remarkably, Zukertort was already assured of victory with three rounds to go, having scored an astonishing 22/23. He then lost his last three games against relatively weak players, probably due to exhaustion. The tournament established Zukertort as rivalling Steinitz to claim to be the best player in the world, and led to the World Chess Championship 1886 match between the two (the first official World Chess Championship match). The event was a double round-robin tournament. Marmaduke Wyvill contributed to organizing the tournament.

The tournament was also notable for the first use of the double-sided chess clock, manufactured by T.B. Wilson of Manchester.

A common story relates to an incident that occurred at the tournament banquet, when the St. George Chess Club President proposed a toast to the best chess player in the world and both Steinitz and Zukertort stood up at the same time to thank him. Research by Edward Winter suggests that this story has been embellished.

The tournament book was dedicated to Prince Leopold, Duke of Albany, for his patronage of the tournament.

The results and standings:

In this tournament a game ending in a draw was replayed at least twice. The third game after two draws would count, whatever the result.