Siegbert Tarrasch (5 March 1862 - 17 February 1934) was one of the strongest chess players and most influential chess teachers of the late 19th century and early 20th century.

Tarrasch was born in Breslau (Wrocław), Prussian Silesia. Having finished school in 1880, he left Breslau to study medicine in Halle. With his family, he settled in Nuremberg, Bavaria, and later in Munich, setting up a successful medical practice. He had five children. Tarrasch was Jewish, converted to Christianity in 1909, and a patriotic German who lost a son in World War I. Yet he faced antisemitism in the early stages of Nazism. 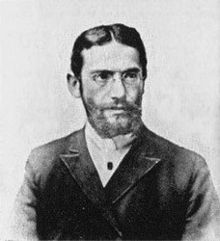 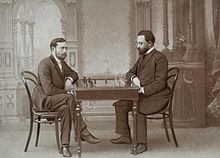 A medical doctor by profession, Tarrasch may have been the best player in the world in the early 1890s. He scored heavily against the aging World Champion Wilhelm Steinitz in tournaments, (+3-0=1), but refused an opportunity to challenge Steinitz for the world title in 1892 because of the demands of his medical practice.

Soon afterwards, in St. Petersburg in 1893, Tarrasch drew a hard-fought match against Steinitz' challenger Mikhail Chigorin (+9-9=4) after leading most of the way. He also won four major tournaments in succession: Breslau 1889, Manchester 1890, Dresden 1892, and Leipzig 1894.

There was no love lost between the two masters. The story goes that when they were introduced at the opening of their 1908 championship match, Tarrasch clicked his heels, bowed stiffly, and said, "To you, Dr. Lasker, I have only three words, check and mate" - then left the room. When Lasker finally agreed to a title match in 1908, he beat Tarrasch convincingly +8-3=5.

Tarrasch continued to be one of the leading players in the world for a while. He finished fourth in the very strong St. Petersburg 1914 chess tournament, behind only World Champion Lasker and future World Champions José Raúl Capablanca and Alexander Alekhine, and ahead of Marshall, Ossip Bernstein, Rubinstein, Nimzowitsch, Blackburne, Janowski, and Gunsberg. His win against Capablanca in the 19th round, though much less famous than Lasker's win against Capablanca the round before, was essential to enable Lasker to achieve his famous come-from-behind victory over Capablanca in the tournament. This tournament was probably Tarrasch's swan song, because his chess career was not very successful after this, although he still played some highly regarded games.

Tarrasch was a very influential chess writer, and was called Praeceptor Germaniae, meaning "Teacher of Germany." He was editor of the magazine Deutsche Schachzeitung in 1897 and wrote several books, including Die moderne Schachpartie and Three hundred chess games. Although his teachings became famous throughout the chess world, until recently his books had not been translated into English.

He took some of Wilhelm Steinitz's ideas (e.g. control of the center, bishop pair, space advantage) and made them more accessible to the average chess player. In other areas he departed from Steinitz. He emphasized piece mobility much more than Steinitz did, and disliked cramped positions, saying that they "had the germ of defeat."

Tarrasch stated what is known as the Tarrasch rule, that rooks should be placed behind passed pawns - either yours or your opponent's. Andrew Soltis quotes Tarrasch as saying

He was a great target of the hypermodern school, led by Richard Réti, Aron Nimzowitsch, and Savielly Tartakower, all of whom criticized his ideas as dogmatic. However, many modern masters regard Tarrasch's actual play as not dogmatic. For example, Tarrasch annotated his victory on the Black side of the Advance French against Paulsen (Nuremberg 1888):

A number of chess openings are named after Tarrasch, with the most notable being:

In the game Tarrasch versus Allies, Black seems to be holding here (at least against immediate catastrophe), because the black queen guards against Qb7+ (followed by Kxa5 Ra1#), while the black rook on c8 defends against Rxc5#. Tarrasch played the ingenious interference move 31.Bc7! (known as a Plachutta interference because the pieces both move orthogonally). This blocks off both defences, and whatever piece captures becomes overloaded. That is, if 31...Rxc7, the rook is overloaded, having to look after both the key squares, since the queen is blocked from b7. So White would play 32.Qb7+ Rxb7, deflecting the rook from defence of c5, allowing 33.Rxc5#. But if Black plays instead 31...Qxc7, the queen blocks off the rook's defence of c5 and becomes overloaded: 32.Rxc5+ Qxc5 deflects the queen from defence of b7, allowing 33.Qb7+ Kxa5 34.Ra1#. Black actually resigned after this move.

In the game against Walbrodt, Tarrasch played rather poorly, and his opponent had the better of it for a long time. But the game is redeemed by the following startling combination: