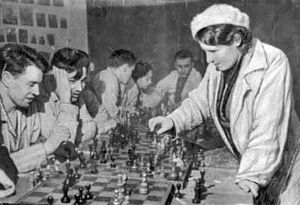 Elisaveta Ivanovna Bykova (or Elisabeth Bykova, Russian: Елизаве́та Ива́новна Бы́кова; November 4, 1913 in Bogolyubovo, Vladimir Oblast, Russian Empire - March 8, 1989 in Moscow, Soviet Union) was a Soviet chess player and the third and fifth Women's World Chess Champion, from 1953 until 1956, and again from 1958 to 1962. She was awarded the title of Woman International Master in 1950, International Master in 1953, and Woman Grandmaster in 1976.

Elisaveta Ivanovna Bykova was born in 1913 in Bogolyubovo (Vladimir Oblast) to a peasant family. Her family moved to Moscow when she was twelve and she began to play chess with her brother. Her talent became apparent in 1927, when she won her school’s chess championship.

After winning in 1952 the women's candidate tournament in Moscow, in 1953 she defeated in Leningrad the reigning champion Lyudmila Rudenko, with seven wins, five losses, and two draws. She lost the title to Olga Rubtsova in 1956, but won it back two years later, becoming the first woman to do so.

She worked as an engineer in a large Moscow printing house, and was also an author and columnist about chess in the USSR. Passionate about women’s chess, Bykova also wrote three books about Vera Menchik, Soviet women chess players, and the Women’s World Championship. She also promoted chess through lectures and the organization of tournaments.