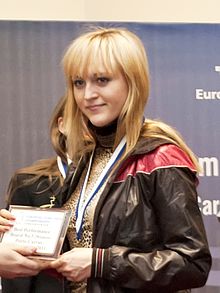 The Women's World Chess Championship 2012 was a knockout tournament, to decide the women's world champion. The title was won by Anna Ushenina of Ukraine for the first time. Defending champion Hou Yifan went out in the second round.

The tournament was played as a 64-player knockout type in Khanty Mansiysk, Russia from 10 November to 1 December 2012. Each pairing consisted of two games, and tie-breaks at faster time controls, if necessary.

After only two wins by lower rated players in the first round, the second round saw the top three seeds all going out to players rated 150 ELO points below them, of those third seed Anna Muzychuk lost to the eventual world champion. The fourth seed went out in the quarter-final. The final consisted of four games at classical time control, followed by tie-break games; in it Anna Ushenina beat former women's world champion Antoaneta Stefanova in the first set of tie-breaks. The unexpected final of two lower seeded players raised questions, if a single match knock-out system is the best way to determine the world champion.

Ushenina lost her title in the Women's World Chess Championship 2013, after game seven of a ten-game match against Hou Yifan, winner of the FIDE Women's Grand Prix 2011-2012.

Players qualified to the tournament through the previous world championship, the FIDE rating list, continental championships and two FIDE president nominees. Players were seeded by their Elo ratings (November 2012 list), except that defending champion Hou Yifan was the no. 1 seed.

The number one woman in the world, Judit Polgár, has never competed for the women's title and did not enter this time either. Other notable absentees were: women's number six Nana Dzagnidze, 2010 finalist Ruan Lufei, and ex-champion Maia Chiburdanidze (inactive).

Each pairing consisted of two games played over two days, one with white and one with black. The time controls in the classical games were 90 minutes for the first 40 moves with a 30 minute addition on move 41. In case of a tie, tiebreaks were played the next day. The format for the tie breaks was as follows: 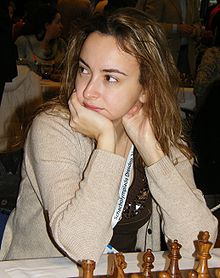 The tournament was streamed on the tournament website each day in full length. Live coverage was interrupted only for advertising breaks. The videostream was also playable on demand until the next day started. Coverage was provided in low and high definition with Grand Master commentary in three languages: English, Russian and for the first time Chinese. In the final days the broadcast was watched by several hundred thousand live viewers.

First round pairings were published in 1 November 2012.