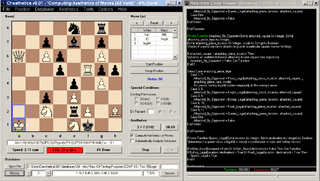 Chess aesthetics or beauty in chess is generally appreciated by both players and composers. This is evident, for example, in brilliancy prizes awarded to some games in certain tournaments and also in the world of chess composition. There are many books published featuring chess problems or puzzles that emphasize its aesthetic aspect. One of the earliest is from the 9th century AD. Aesthetics in chess can be both a source of pleasure for humans and also instruction, as compositions or games featuring it typically illustrate original ideas or new instantiations of old ones. A good chess problem composer, however, is not necessarily a good player.

Factors about a game or move sequence (also referred to as a 'combination') that might cause it to be regarded as 'brilliant' by most players include, among other things: expediency, disguise, sacrifice, correctness, preparation, paradox, unity and originality.

Composition conventions such as not having any checks or captures in the first (i.e. key) move, and the use of variations to illustrate a particular theme (e.g. zugzwang, pin) also play a role in the aesthetics of the game.

Conceptually, a 'common ground' of aesthetics between the domains of real (e.g. tournament) games and compositions can be established. These are beauty characteristics that apply approximately equally to both domains; examples include heuristic violations, economy and material sacrifice. This common ground is useful in computational models of aesthetics in the game because it helps in experiments comparing the beauty of compositions (on average, considered more beautiful) against the beauty of real games (on average, considered less beautiful). Some factors that pertain solely to real games (e.g. pressure under time control) or compositions (e.g. avoidance of castling moves) may be conflated with aesthetics in the game - and perhaps to some degree this is justifiable - however, they would lie outside the common ground described above.