Chess in the arts 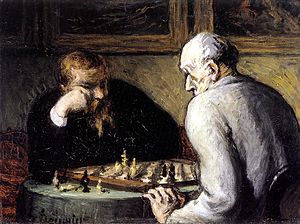 Chess became a source of inspiration in the arts in literature soon after the spread of the game to the Arab World and Europe in the Middle Ages. The earliest works of art centered on the game are miniatures in medieval manuscripts, as well as poems, which were often created with the purpose of describing the rules. After chess gained popularity in the 15th and 16th centuries, many works of art related to the game were created. One of the most well-known, Marco Girolamo Vida's Scacchia ludus, written in 1527, made such an impression on the readers, that it single handedly inspired other authors to create poems about chess.

In the 20th century, artists created many works related to the game, sometimes taking their inspiration from the life of famous players (Vladimir Nabokov in The Defense) or well-known games (Poul Anderson in Immortal Game, John Brunner in The Squares of the City). Some authors invented new chess variants in their works, such as stealth chess in Terry Pratchett's Discworld series or Tri-Dimensional chess in the Star Trek series.

Some of the earliest examples of chess-related art are medieval illustrations accompanying books or manuscripts, such as this chess problem from the 1283 Libro de los juegos 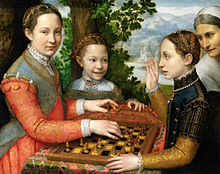 Palatine Chapel in the Norman Palace in Palermo you can admire the first painting of a chess game that is known to the world. The work dates from around 1143 and the artists who created the Muslims were chosen by the Norman king of Sicily Roger II of Hauteville, who erected the church. The earliest known reference to chess in a European text is a Medieval Latin poem, Versus de scachis. The oldest manuscript containing this poem has been given the estimated date of 997. Other early examples include miniatures accompanying books. Some of them have high artistic value. Perhaps the best known example is the 13th-century Libro de los juegos. The book contains 151 illustrations, and while most of them are centered on the board, showing problems, the players and architectural settings are different in each picture. The pieces illustrating chess problems in Luca Pacioli's manuscript De ludo scacchorum (Latin: On the Game of Chess) (c. 1500), described as "futuristic" even by today's standards, may have been designed by Leonardo da Vinci.

After chess became gradually more popular in Europe in the 15th and 16th centuries, especially in Spain and Italy, many artists began writing poems using chess as a theme. Scachs d'amor (Catalan: Chess of love), written by an unknown artist in the end of the 15th century, describes a game between Mars and Venus, using chess as an allegory of love. The story also serves as a pretence to describe the rules of the game. De ludo scacchorum (unrelated to the manuscript mentioned above) by Francisco Bernardino Caldogno, also created at that time, is a collection of gameplay advice, presented in poetic fashion.

One of the most influential works of chess-related art is Marco Girolamo Vida's Scaccia ludus (1527), centered on a game played between Apollo and Mercury on Mount Olympus. It is said that, because of its high artistry, the poem made a great impression on anyone who read it, including Desiderius Erasmus. It also directly inspired at least two other works. The first is Jan Kochanowski's poem Chess (c. 1565), which describes the game as a battle between two armies, while the second is William Jones' Caissa, or the game of chess (1772). The latter poem popularised the pseudo-ancient Greek dryad Caïssa to be the "goddess of chess".

Since the 19th century, artists have been creating novels and - since the 20th century - films related to chess. Sometimes, they are inspired by famous games, like John Brunner's The Squares of the City, structured after the famous match between Wilhelm Steinitz and Mikhail Chigorin; Poul Anderson's short story Immortal Game, inspired by the 1851 game played by Adolf Anderssen and Lionel Kieseritzky (which also appears in the film Blade Runner); or Waldemar Łysiak's Szachista (Polish: The Chess Player), centered on a game played between Napoleon Bonaparte and The Turk. The game Frank Poole versus HAL 9000 from the film 2001: A Space Odyssey is also based on an actual match, albeit not widely known.

Other artists drawn their inspirations from the life of players. Vladimir Nabokov wrote The Defense after learning about Curt von Bardeleben, while the musical Chess was loosely based on the life of Bobby Fischer. Some authors invented new chess variants in their works, such as stealth chess in Terry Pratchett's Discworld series or Tri-Dimensional chess in the Star Trek series.

One unusual connection between art and chess is the life of Marcel Duchamp, who almost fully suspended his artistic career to focus on chess in 1923. 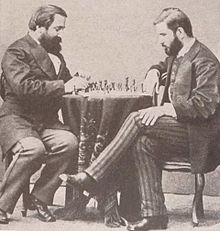 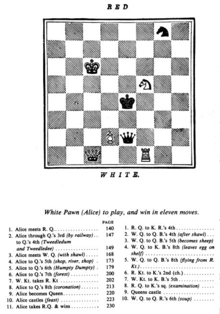 "White Pawn (Alice) to play, and win in eleven moves." Table of contents of Lewis Carroll's Through the Looking-Glass (1871)

In film and television 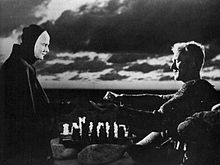 The Seventh Seal (1957), directed by Ingmar Bergman. The iconic scene of Death and Antonius Block in a chess game

As the popularity of the game became widespread during the 15th and 16th centuries, so too did the number of paintings depicting the subject. Continuing into the 20th century, artists created works related to the game often taking inspiration from the life of famous players or well-known games. An unusual connection between art and chess is the life of Marcel Duchamp, who in 1923 almost fully suspended his artistic career to focus on chess.