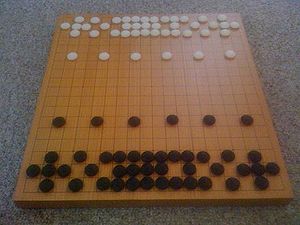 The starting position of Gess.

Gess is a strategic board game for two players, involving a grid board and mutating pieces. The name was chosen as a conflation of "chess" and "go". It is pronounced with a hard "g" as in "go", and is thus homophonous with "guess".

Gess was created by the Puzzles and Games Ring of The Archimedeans, and first published in 1994 in the society's magazine Eureka. It was popularized by Ian Stewart's Mathematical Recreations column in the November 1994 issue of Scientific American.

A go set is one easy way to assemble the equipment needed for gess. The 19 x 19 line grid is simultaneously an 18 x 18 grid of squares, and the starting position needs only 43 each of the black and white stones.

The rules describe a highly variable set of pieces, which will often change every turn. In total there are 510 possible sets of a footprint; however, the starting position uses these rules to emulate chess pieces: king, queen, bishop, rook and pawn in this order R - B - Q - K - B - R in the last row (black's view) and 6 pawns in the next row. The game objective, to remove the opponent's "ring" (described as a piece that moves like a chess king) also mimics that of chess.

A move is notated by noting the place of the centre of the footprint at the beginning of a move and its place at the end of the move.