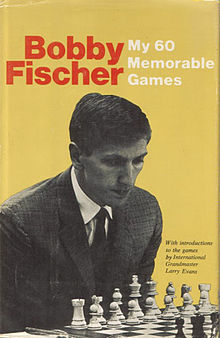 The 1969 Simon & Schuster edition of My 60 Memorable Games

My 60 Memorable Games is a chess book by Bobby Fischer, first published in 1969. It is a collection of his games dating from the 1957 New Jersey Open to the 1967 Sousse Interzonal. Unlike many players' anthologies, which are often titled My Best Games and include only victories, My 60 Memorable Games includes nine draws and three losses. It has been described as a "classic of objective and painstaking analysis" and is regarded as one of the great pieces of chess literature.

The book was originally published in descriptive notation. An algebraic notation version in 1995 caused some controversy in the chess world because of the many other changes made to the text, with Fischer himself denouncing the edition. In 2008 a reissue of Fischer's original text was published, the only changes being the updating to algebraic notation and the correcting of typographical errors, notation mistakes, and the erroneous last few moves of game 17 (versus Mikhail Tal).

The book had been planned for some time, to be published by Simon & Schuster. Its first title was to be Bobby Fischer's Best Games of Chess. Fischer first announced it would appear "after my match with Botvinnik" (then World Champion), an event first suggested for 1962 and again in the mid 1960s but which never took place. Fischer then added more games, and retitled it My Memorable Games - 52 Tournament Games. (At one time it was also titled My Life in Chess: 52 Memorable Games.) At that point the collection ended at the Piatigorsky Cup in 1966. However he then had an abrupt change of heart and decided not to publish the book at all, and asked to be released from his contract. It was suggested that he did not want to reveal all his secrets, as the book has lengthy annotations and analysis of different possible variations of his games. In 1968 he changed his mind and decided to go ahead with publication. His friend and colleague Grandmaster Larry Evans, who helped in an editorial capacity and also wrote introductions to all the games, has said this was because Fischer felt philosophically that "the world was coming to an end anyway" and he might as well make some money. Fischer thought that the Rapture was coming soon. Fischer continued to revise the manuscript and added eight more games, also changing the title to My Memorable Games - 60 Tournament Struggles before settling on the final name.

The collection begins in 1957, omitting the famous "Game of the Century" against Donald Byrne in 1956 (this game had been included in a small, lightly annotated work called Bobby Fischer's Games of Chess, published in 1959). The three losses are to Tal at the Candidates Tournament 1959, Spassky at Mar del Plata 1960, and Geller at Skopje 1967. Among the draws are his only encounter with World Champion Mikhail Botvinnik, at the 1962 Varna Olympiad. This game contains the longest piece of analysis in the book, with Fischer concluding that he missed a win in the endgame. Botvinnik later disputed this, with a refutation from one of his chess school pupils, 13-year-old Garry Kasparov. This is one of the few examples of Fischer's analysis being questioned. Among the wins are his first defeat of a Soviet Grandmaster, Paul Keres at Zurich 1959, and his 21 move victory as Black over Robert Byrne at the 1963/64 US Championship. There are seven games from his first Candidates tournament in 1959, but only two from his second at Curaçao 1962. All the games were played under tournament conditions except for a friendly game at the home of Reuben Fine in 1963 and a win from Fischer's 1964 simultaneous exhibition tour of the US.

Fischer makes several atmospheric observations about his opponent's habits and reaction to his moves. In the opening game he writes that "Sherwin slid the rook with his pinky, as if to emphasize the cunning of this mysterious move." In another game he recalls that "Petrosian and Tal both happened to stroll by the board at this point. Petrosian made a wry face which looked to me like 'Can Black do this and live?'", "Poker-faced as always Keres made this move as though it was the most natural one on the board" (Game 37.) "From the glint in his eye I could see that he had come prepared for my King's Indian" (On the game against Botvinnik.)

He also gives his opinions on openings, mentioning that he had "never opened with the QP [queen pawn] - on principle" and that 1.e4 is "Best by test."

My 60 Memorable Games was enthusiastically received by the chess community, and was an immediate success. A review in British Chess Magazine in December 1969 called it "a great book without a doubt, and (it) can go straight on the shelf alongside Alekhine and Tarrasch and fear no comparisons." Upon its reissue in 1995 the same magazine suggested it could be the best chess book ever written. Fischer was praised for his honesty, and the depth and accuracy of his annotations. It has had a great influence on today's top players. Peter Biyiasas became an International Master by studying only two books: Rook Endings by Levenfish and Smyslov (see Rook endings), and My 60 Memorable Games. It was also Grandmaster Bu Xiangzhi's first chess book. He said, "the games were... fantastic!"

The Russian edition of the book appeared in 1972, without Fischer's permission and without regard for copyright laws. This was standard Soviet practice at the time. The translator had trouble with some of Fischer's American colloquialisms and also omitted several statements that were felt to be anti-Soviet. The edition included a supplementary article assessing Fischer's playing style, written by Grandmaster Igor Zaitsev. At one of the press conferences for his 1992 rematch with Boris Spassky, Fischer said 50,000 copies had been printed in the USSR and he "hadn't got a penny" from them. He answered speculation about a match with the then World Champion Garry Kasparov by saying nothing could take place until the Russian authorities had paid him all the royalties he felt he was owed. This edition was one of Kasparov's first chess books.

British publisher Batsford released a new edition of My 60 Memorable Games in 1995. Chess writer and Grandmaster John Nunn converted the original descriptive chess notation to modern algebraic notation using a computer program. At a press conference in Buenos Aires in June 1996, Fischer denounced the new edition, accusing Batsford of "changing everything in my book, the notation, the format, the pages, the analysis... and without paying royalties." Batsford responded that they had purchased the rights to the book legally from Faber and Faber, and pointed out that they had corrected many of the ambiguities in the descriptive notation of the moves. However, it emerged that they had added faulty analysis to one game, incorrectly believing Fischer had overlooked a mate in four moves.

Chess historian Edward Winter discovered that there had also been over 570 textual changes. He wrote in CHESS magazine that "... entire notes of Fischer’s had been omitted, individual words had been deleted, other words had been added", and "Fischer’s wording had simply been changed without justification". Grandmaster Hans Ree stated that "[i]n the Netherlands such changes constitute a criminal offense that could theoretically lead to a prison sentence. ... Fischer had been quite right in his anger." This edition is now out of print, and in 2008, Batsford reissued the book using Fischer's original words. Batsford claimed that the only change made was the conversion to algebraic notation, although a review of the 2008 edition found that several typographical errors and notation mistakes have also been corrected.

In December 2007 copies of an apparently updated edition entitled My 61 Memorable Games appeared for sale on eBay. It contained a new foreword supposedly written by Fischer, but his involvement was at best unclear, and eBay soon stepped in to end the auction.

The book is a hoax. Gardar Sverrisson and Einar Einarsson, who were very close to Fischer during his final days in Iceland, state that My 61 Memorable Games "is neither his work nor done with his approval". While Larry Evans originally thought it was possible that it was a pirated version of a genuine Fischer manuscript, he later concluded it was a hoax. In 2012 Edward Winter acquired a copy of the book and presented a number of pages and other documentary information in his article My 61 Memorable Games (Bobby Fischer).