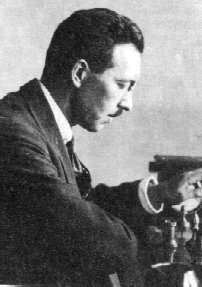 Grigory Yakovlevich Levenfish (Russian: Григо́рий Я́ковлевич Левенфи́ш; 21 March 1889 [O.S. 9 March] in Piotrków - 9 February 1961 in Moscow) was a Russian chess grandmaster who scored his peak competitive results in the 1920s and 1930s. He was twice Soviet champion, in 1934 (jointly with Ilya Rabinovich) and 1937. In 1937 he drew a match against future world champion Mikhail Botvinnik. He also had a career as an engineer. Levenfish was a well-regarded end-game specialist and chess writer.

Levenfish was born in Poland, then part of the Russian Empire, to Jewish parents. He spent most of his formative years in St. Petersburg, where he attended St. Petersburg State University and studied chemical engineering.

His earliest recognition as a prominent chess player came when he won the St. Petersburg chess championship of 1909, and played in the strong Carlsbad (now Karlovy Vary) tournament of 1911, although he made a minus score in the very strong field. At age 22, this was to be his first and last tournament outside Russia or the Soviet Union. His play at the time was compared to that of the great master Chigorin. Into the next decade, he continued to perform well in local tournaments, most notably winning the Leningrad Championships of 1922, 1924, and 1925 (jointly). 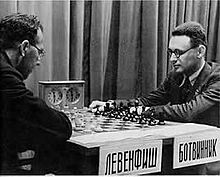 Levenfish (left) takes on Botvinnik (right) in their 1937 match

In the very strong Moscow International tournament of 1935, he scored 10.5/19, to tie for 6th-7th places, as Botvinnik and Salo Flohr won. In a Soviet-only tournament at Leningrad 1936, he placed third with 8.5/14. Participation in the Leningrad-Moscow training tournament of 1939 resulted in a shared 3rd-6th-place finish, with 10/17, behind winner Flohr and Samuel Reshevsky.

In match play, he drew with Mikhail Botvinnik in 1937 over 13 games, and beat Vladimir Alatortsev in 1940.

Lack of support and recognition

Despite his successes, Levenfish was virtually ignored by the Soviet chess authorities. They consistently supported his great rival Botvinnik, and pretenders to the throne were not encouraged. Levenfish was a member of the older generation of masters, 22 years older than Botvinnik. He was the only strong Soviet master of his generation who was denied a stipend. This meant that he could only afford a poorly heated room in a run-down block of flats. Worse still, the government refused him permission to travel abroad and compete in tournaments such as AVRO 1938 (even though he was the reigning Soviet Champion). This further weakened his standing and most likely affected his morale; not to mention his continued development as a chess player. Other players born pre-revolution, such as Alekhine, Bogoljubov, Rubinstein and Nimzowitsch, were all allowed to travel and even ended up living abroad. Deprived of the same opportunities, Levenfish played only within the confines of Soviet Russia and supplemented his income with a job as an engineer in the glass industry. This eventually resulted in a slow retirement from active play.

Levenfish was awarded the title of International Grandmaster by the FIDE, the World Chess Federation, in 1950, the year the title was introduced officially.

Genna Sosonko, in his book Russian Silhouettes, echoes the thoughts of some grandmasters who knew him, and they speak of a man of integrity and independence, who never complained about his difficult living conditions. Spassky encountered him in a Moscow subway, just days before his death. Levenfish, who had a wretched look, was clutching a handkerchief to his mouth and declared that he had just had six teeth extracted. Smyslov recounts the time that Levenfish visited him, towards the end of his life, armed with a huge pile of papers. It turned out to be a manuscript detailing his lifetime work on rook endgames. He asked Smyslov to check for errors, and some minor corrections later, the book was published (1957) bearing both names, under the (translated) title The Theory Of Rook Endings (later published in English in 1971 under the title Rook Endings). Smyslov freely admits that all of the hard work was carried out by his co-author.

As the games selection shows, Levenfish defeated virtually all of the top Russian and Soviet players from the 1910s to the early 1950s, and beat world champions Alexander Alekhine and Emanuel Lasker as well. Paul Keres and David Bronstein each had the advantage on him, but they were much younger men, and Levenfish was past his prime when those encounters took place. Levenfish was strong on the Black side of the French Defence and the Slav Defence, and generally played classical openings, although he did play the hypermodern Grunfeld Defence and Nimzo-Indian Defence on occasion.

Regarding his playing abilities, Sosonko points to his deep understanding of the game and a keen eye for brilliantly imaginative moves. It was as a tactician that he really excelled, delivering elegant combinations and unexpected tactical blows, that many thought were impossibly ambitious. He was also an accomplished and leading opening theorist; the inventor of the Levenfish Attack, a sharp variation of the Sicilian Defence, devised to combat Black's ever-popular Dragon set-up. It remains fully playable in modern practice.