Martian Chess is an abstract strategy game for two to six players invented by Andrew Looney. It is played with Icehouse pieces on a chessboard. To play with a number of players other than two or four, a non-Euclidean surface can be tiled to produce a board of the required size, allowing up to six players. 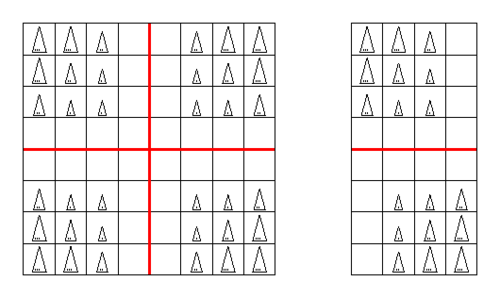 Each player starts with nine pieces: three small (pawns), three medium (drones), and three large (queens). The color of the pieces is irrelevant to the gameplay. A mix of colors is recommended.

Players initially place their pieces in the corners of the board as shown. In a two-player game, only a half-board is used.

The players decide who moves first. Play turns alternate, and pass to the left after each move.

The red lines in the diagrams indicate notional canals which divide the board into territories. At any given time a player controls only those pieces that are in his or her territory.

The pieces move as follows:

As in chess, a square may contain no more than one piece, and a piece is captured when an enemy piece lands on the square it occupies. The capturing player removes the piece and puts it aside for later scoring.

Since a piece is always owned according to the territory it is in, a player whose piece is captured immediately gains control of the capturing piece. (It is easy to forget this if each player's starting pieces share an identifying color, so it is better if each player starts with a mix of colors, or if all pieces on the board have the same color.)

In the two-player game, a player may not immediately reverse an opponent's last move (i.e. may not move the piece across the canal back to its departure square, on the next turn).

End of game and scoring

The game ends when one player runs out of pieces (i.e., their territory becomes empty). Players then compute their scores by adding up the point values of the pieces they captured: queen = 3, drone = 2, pawn = 1. The player or team with the highest total wins the game.

In the four-player game, the players form two teams, with teammates in opposite corners. Teammates play for a combined score. Aside from strategic differences, play is unaffected; it is legal (and sometimes good strategy) to capture your teammate's pieces.

Capturing with a queen often allows the opponent to immediately recapture, leading to a back-and-forth battle until one player runs out of pieces in the line(s) of capture. This is more common in two-player games, since other players may interfere in the four-player version. The net point difference is usually minor with two players, but can give the players involved a significant lead over the others in a four-player game.

Moving a pawn or drone into enemy territory can be a good move for several reasons: