Minchiate is an early 16th century card game, originating in Florence, Italy. It is no longer widely played. Minchiate can also refer to the special deck of 97 playing cards used in the game. The deck is closely related to the tarot cards, but contains an expanded suit of trumps. The game was similar to but more complex than tarocchi.

Scholars generally believe that the tarot cards, then known as trionfi, were invented in northern Italy circa 1420s to 1440; they spread elsewhere in Italy early on. The minchiate represents a Florentine variant on the original game. The deck belongs to the southern tarot patterns which includes the Tarocco Bolognese and the Tarocco Siciliano. The game was first known as germini, after the Gemini (XXXV) card, the highest of the newly introduced trumps. It was later known as minchiate in the 17th century. In Sicily, it was called gallerini while in Liguria it was known as ganellini but the rules used in these regions are lost save for cryptic references that they were quite different from the Florentine game.

The word minchiate comes from a dialect word meaning "nonsense" or "trifle". The word minchione is attested in Italian as meaning "fool", and minchionare means "to laugh at" someone. The intended meaning may be "the game of the fool", considering that the card "The Fool", also called "The Excuse", features prominently in the game play of all tarot games. In tarocchini, sminchiate is a signal used to communicate to a teammate.

The game spread from Florence to the rest of Italy and to other areas of Europe including France. By the 18th century, minchiate had overtaken the original game of tarot in popularity in Italy. Paolo Minucci published a commentary on the game in 1676, and the game is described in detail by Romain Merlin in Origine des cartes à jouer, published in Paris in 1869. The game was still played in Genoa in the 1930s, but its popularity declined in the late 19th and early 20th century.

The minchiate deck differs from the standard tarot deck in several particulars. The first and most obvious difference is that the trumps have almost doubled in number; there are 40 trumps in the minchiate, in addition to the unnumbered card the Madman, The Fool or the excuse. Minchiate uses additive Roman numerals for its trumps. Due to the large number of trumps, players generally called them by their number with the exception of the aire.

The trumps of the minchiate deck, and their corresponding tarot of Marseilles cards and the esoteric Rider-Waite tarot deck are: 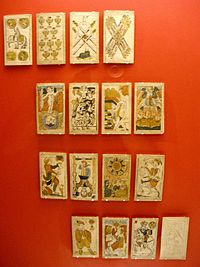 The ace to ten and the court cards resemble their standard counterparts more closely. There are the four standard Latin suits of swords, batons, coins, and cups; these contain pip cards from ace to ten, and four face cards: a jack, a knight, a queen, and a king. In the minchiate deck, however, in the suits of cups and coins, the "knaves" or "pages" (Italian fanti) have been replaced by "maids" (fantine). The knights, mounted figures in the tarot of Marseilles and similar designs, are centaurs or sphinxes in many minchiate decks. The suits follow the Portuguese pattern with the exception of the batons which follows the northern Italian suit-system.

Minchiate is a southern tarot pattern so it shares many qualities with the Bolognese and Sicilian tarots as opposed to the western patterns like the tarot de Marseille. The Popess and the Pope are absent from the minchiate trumps (at least no Pope nor Popess are depicted); instead, it contains a Grand Duke. The Etrurian minchiate also lack the Empress and instead depicts two different Emperors; a western and an eastern.

Justice, Fortitude, and Temperance were three classical "cardinal virtues" depicted in the more familiar tarot trumps. The minchiate supplies the remaining cardinal virtue  - Prudence  - and but inserts them with the three theological virtues, Faith, Hope and Charity. The only other deck to have the theological virtues was the Cary-Yale deck. This is the only deck to include all seven virtues.

While the Tower is called The House of God in the Marseilles tarot, it is called the House of the Devil or Hellmouth in the minchiate deck and it depicts a nude woman fleeing a burning building. The Moon depicts an astrologer studying the moon instead of the tarot of Marseilles howling dogs and lobster. The card corresponding to the Hermit is often called Time, or the Hunchback; it depicts an elderly man on crutches. The minchiate version of the Hanged Man is called the Traitor; he carries bags in his hands as he hangs upside down, a representation associated with treason in 14th-century Italy. Like other southern decks, the final card in the series is not the World, but Judgement. The minchiate completes the series by adding all the zodiac signs (in random order) and the four classical elements.

The eight highest ranking trumps have a red background while the top five (the aire) are usually unnumbered. A 98th card was made for some decks. It is a trump with a red background and is also unnumbered like the aire. It depicts a nude woman running in a wheel, probably representing Fortuna. While 98-card decks were mentioned as being played in Sicily during the early 18th century, only a few examples from Genoa survive. It is uncertain how this card ranked and how it affected the versicole sequences in the game. Also unknown is how it relates to the 98-card version of the Minchiate Francesi described below.

The Minchiate Francesi, also called Minchiate de Poilly after its attribution to engraver François de Poilly, refer to 3 different French decks utilizing the same set of engravings. The first has 42 numbered trumps, the second has 40 numbered trumps and Momus as an unnumbered card and lacks the first's "Le Chaos" card, the third has 21 numbered trumps and Momus as an unnumbered card. The intended game for the first deck is unknown, but the second appears to be intended to be played like the Italian Minchiate while the third deck appears to be intended for ordinary Tarot (despite still being called a Minchiate deck). The order of the motifs for the two latter decks have been rearranged compared to the first deck to more closely resemble their Italian counterparts. All three decks have the same 56 pips cards with French suits. The engravings share motifs with both the Italian Minchiate and the Tarot Nouveau as well as taking unique motifs from Roman Mythology.

Mysterious French suited decks produced by Piatnik of Vienna around 1930 also featured forty trumps. It resembles the Industrie und Glück decks used for Central European tarock. The plain suits consists of only 32 cards while the 40 trumps feature rustic genre scenes. With the Sküs (the Fool), the total number of cards is 73. Compounding the mystery is that the packaging is in French. Industrie und Glück type decks are not known to have a community of players in any French speaking country while the game of Minchiate is thought to have been restricted to only a few players in Genoa by the 1930s.

Minchiate can be played by two to four players with the most common version played by four players divided into two partnerships. The game, like other tarot games, is a trick taking game in which points are scored by capturing certain cards and sets of cards. As in most tarot games, the pip cards in cups and coins are in reverse order and play is counter-clockwise. The lowest five trumps (Trivial Performer, Grand Duke, Western Emperor, Eastern Emperor, Love) were called papi, "popes", even though "Il Papa" (The Pope) does not appear among the minchiate trumps. The highest five trumps (Star, Moon, Sun, World, Trumpets) were called arie ("airs") and have a special high scoring value in the game. Minchiate is similar in many ways to tarocchini played in Bologna. In these games, combinations of cards are more important than the value of individual cards.

The last trick is worth 10 points. Trump 29 is a unique card, by itself it is worth nothing but when used in combinations (versicole), it is worth 5 points. Versicole are formed through a sequence of three or more of consecutive point cards. In addition, there are four irregular versicole:

All versicole have to be declared at the beginning of the game. At the end of the round, each team will assemble versicole from their captured tricks. Trumps 1, 3, 13, 20, 28, 30-33, and 38 are considered valuable cards because they are required to form some versicole or to deny the opposition the same. The Fool can be added to any versicola.

Like in other tarot games, the Fool excuses the player from following suit. It can be surrendered to the opposition if they won all the tricks in which case 5 bonus points are given on top of the value of the card.

The minchiate deck was also used to play two games that don't use normal tarot rules, Al Palio and A sei tocchi.

Although no divination system using this pack of cards ever existed in previous centuries, and because of this allegorical and cosmological content, in recent years tarot occultists have proposed systems of divination and cartomancy that use the minchiate deck. In Charles Godfrey Leland's book 1890 book Aradia, or the Gospel of the Witches, an incantation is given that mentions the use of "40 cards", which are renamed in the spell as 40 gods who are being invoked to compel the goddess Laverna to do the caster's bidding. Paul Huson has speculated that these 40 cards are the 40 trumps of the minchiate deck. He has also pointed out that Leland's book Etruscan-Roman Remains in Popular Tradition (1892) contains a spell that is cast with tarocco cards, to invoke Janus.

The Italian publisher Lo Scarabeo offers a reproduction of the "Ancient Minchiate Etruria", an engraved minchiate deck that originally appeared in 1725.

The Italian publisher Il Meneghello offers a reproduction, in regular and mini sizes, of the "Minchiate Fiorentine", a woodcut minchiate deck that originally appeared circa 1820.

The late tarot artist Brian Williams (died 2002) published a modern edition of the minchiate deck, which accompanies his book referenced below.