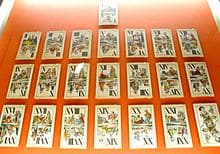 Industrie und Glück (German for 'Industry and Luck') is a pattern of French suited playing cards used to play tarock. The name originates from an inscription found on the second trump card. This deck was developed during the nineteenth century in the Austro-Hungarian Empire. After the collapse of the empire in World War I, it remained the most widely used tarot deck in Central Europe and can be found throughout the former parts of the empire. Though not designed for cartomancy, these cards were used in Argentine fortune telling decks in the mid-20th century.

In the Industrie und Glück deck, each suit contains four face cards; the Jack, Cavalier, Queen, and King. The 5s through 10s in red suits and the 1s through 6s in the black suits are removed and 22 trumps are added for a total of 54 cards. In Central European tarock games, the order of the black suits from highest to lowest goes from K, Q, C, J, 10, 9, 8, 7 but the red suits goes from K, Q, C, J, 1, 2, 3, 4. The Sküs (The Fool), named after the French Excuse, is considered the 22nd and highest trump and no longer has its excusing power despite its name. The lowest trump is called the pagat after its Italian equivalent, il bagatto. Unlike the Italian tarocco decks which depict Renaissance allegorical motifs or even the French Tarot Nouveau which added modern themes, all Industrie und Glück trumps illustrate genre scenes of rural life with no themes. All trumps except the unnumbered Excuse use Roman numerals unlike the Tarot Nouveau or Cego decks. The pip cards and face cards lack corner indices.

The trull (honours) in the most common version

Three versions of this deck exist. One version, depicting the various ethnic groups of the Austro-Hungarian Empire, ceased production after its collapse in the First World War. The second version was found primarily in Hungary and the third throughout Central Europe. All three shared many pictures in the trump suit but some are arranged differently. In the common version, the 21st trump is nicknamed mond (moon) because it features a crescent moon. This was a result of a mistranslation of the French monde for The World tarot card. The Hungarian version, which is now manufactured only by Modiano and Piatnik, lacked the moon. The Czechs use the common version but since receiving their independence at end of the First World War, the second trump has lacked the Industrie und Glück inscription.