King cards of all four suits in the Rouennais pattern

The king card is the oldest and most universal court card. It descends directly from the Mamluk king card where it outranked the viceroy card.

In a French deck, the court cards do have names. Because the manufacture of playing cards was illegal in England during the Interregnum, when the English Restoration came and the court began playing card games, the suits in an English deck came from the French deck, but without all of the lore. For a period, starting in the 15th century, French playing-card manufacturers assigned to each of the court cards names taken from history or mythology. The names inscribed on these cards still appear on 32-card decks in France. The names for the kings in the French national pattern (Parisian or portrait officiel) are:

In many card games, when all four kings are acquired by a single player, they are commonly called "the four horsemen". 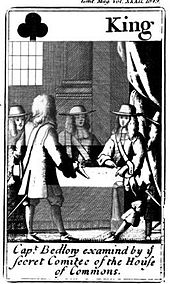 King of Clubs from a deck of Popish Plot cards 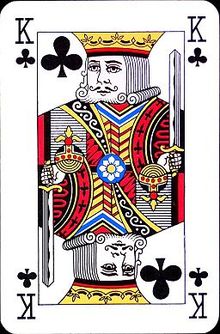 In cartomancy, the King of clubs has the meaning of good character and loyalty and the realization of ideals. The card is said to be one who has great power, but one who is not aware of this, and is outwardly cheerful but inwardly reserved.

The King of clubs is said to have a natural affinity for the Queen of diamonds. 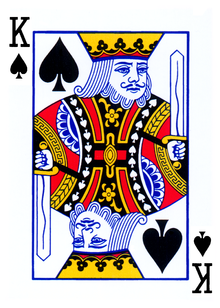 In the French national pattern, the King of Spades is the Biblical King David. The suit of spades means "swords" from the Italian spada and the sword which he holds is that of Goliath, whom David slew. The king is holding a harp, as the Bible attributes many of the psalms to David.

In cartomancy, the King of Spades reversed is viewed as a dishonest lawyer. He is a stern law giver who is not easily swayed by emotion. It is representative of a dark haired person who is intelligent and authoritative in judgment, and is not easy to get along with.

In the Rouennais pattern, the king of hearts is sometimes called the "suicide king" because he appears to be sticking his sword into his head. This is a result of centuries of bad copying by English card makers where the king's axe head has disappeared. The king of hearts is the only one of the kings without a mustache.