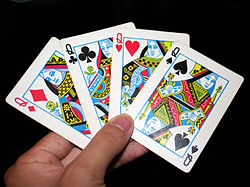 Queen cards of all four suits in the Rouennais pattern

In the game of Hearts, the Queen of Spades is the major card to avoid, and is called a variety of unsavoury names.

French deck manufacturers assigned each court card a particular historical or mythological personage. The Queens in a French deck have assigned names as follows:

Since both King and Queen in the French language begin with the letter R, French queen cards are called Dame (Lady).

Queen of Flowers from the first printed deck (15th century)