Distribution of French (blue) and Swiss (orange) playing cards in Switzerland and Liechtenstein.

Distribution of the Swiss deck is roughly east of the Brünig-Napf-Reuss line, in Schaffhausen, St. Gallen (and in adjacent Liechtenstein), Appenzell, Thurgau, Glarus, Zürich, all of Central Switzerland and the eastern part of Aargau. 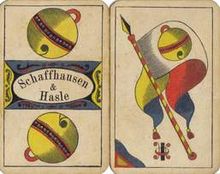 The ace and banner of Schellen from the 1880s "single image" Müller deck.

The suits are as follows:

The most common deck has 36 cards, nine of each suit. The card values are, in ascending order,

For the purposes of Jass, the numbered cards (six to nine) have no point value, the banner has a value of ten points, the picture-cards Under, Ober, König have values of two, three and four points, respectively, and the As has eleven points. The reduction to 36 cards (eliminating card values two to five) and the use of a male Ober instead of the "Queen" (perhaps related to the "Knight") is not unique to the Swiss deck but also found in a variety of German decks. Both "acorn" and "bells" are suits also found in German decks, while "shields" and "roses" seem to be unique to Switzerland.

A less common deck is the 48 card set containing the 3s, 4s, and 5s and is used to play the Karnöffel variant Kaiserspiel. 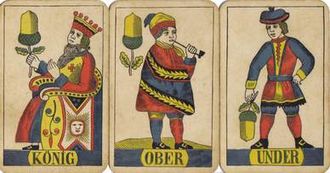 Early form of the "single image" variant of the deck, printed c. 1880 by J. Müller Cie, here showing the three face cards of Eicheln (acorns). The 1920s "double image" design which is now standard was directly based on this one.

The Under corresponds to the Jack or Knave. The Under of trumps becoming the highest card in the game can be traced to the 15th-century game Karnöffel. The face cards in the 1920s Müller design show twelve individual characters, which have remained unchanged since. The sequence Under, Ober, König depicts social stratification, the Under characters are working class, depicted as a fool or jester (Schellen), a messenger or scribe (Schilten), a peasant (Rosen) and a soldier or page/servant, while the Ober characters are shown as clerks or overseers/officers, while the kings are, of course, crowned monarchs (three of them seated, the king of Rosen is shown standing). The four Under characters hold their suit symbol facing downward, the Ober and König characters hold it facing upward (with the exception of Eicheln Ober and Schilten König, whose suit symbols are hovering in the top left corner without their holding it as they are holding a pipe and a cup instead, respectively).

The design of the deck originates in the early modern period, and had become fixed by the 1920s. Predecessors of the now-traditional Swiss German deck appear in the 18th century, and go through various stages of evolution during the 19th century. Johannes I Müller of Diessenhofen printed an early such deck in 1840. His successor Johannes II Müller was the owner of the Müller company in Schaffhausen which printed a "single image" variant of the deck in c. 1880, from which it derived the "double image" design which is now standard in c. 1920.

Since the introduction of this deck, the various manufacturers of this deck can only be distinguished in minor design details, and in some cases by the company name printed on the aces of Schellen and Schilten. In this design, a central rectangle on the aces of Schellen and Schilten were used for the text "Schaffhausen & Hasle" (the location of the presses) and "Spielkartenfabrik", respectively. Also in the 1920s, a nearly identical design was produced by Hächler und Söhne of Zürich, indicated as "HASO" on the ace of Schellen. In designs derived from the 1920s Schaffhausen one, the ace of Schellen is still used to attribute the design to the original design, while the ace of Schilten is used to indicate the present manufacturer. The "single image" version survived into the 1950s, but became increasingly rare after 1920.

From the 1930s onward, the number of manufacturers increased. There was Walter Scharff Co. ("WASCO", Ennetbaden), 1930; "Bernina, Dauer-Jasskarten" (Otto Hauser-Steiger, 1939-1946), and others. The Swiss discounter Migros began selling playing cards in the 1940s. Their cards were only identified by an image of a crossbow on the ace of Schellen. Since they are otherwise identical to the Hächler Söhne ones, it is likely that this company produced for Migros.

There have repeatedly been "special" variant designs of the traditional deck, but all of these were short-lived, and intended as humorous or designed for a special purpose. There have been "feminist" designs which show all the face cards as women (Frauezogg, designs by Elsi Jegen and Susan Csomor), and there have been numerous "special" decks made for marketing purposes where certain cards had an altered design showing a logo or mascot of the company in question; an early "special edition" of the Swiss deck was a "military" version printed in 1915 on the occasion of the World War I mobilization; the suits became "cavalry, artillery, infantry, engineers". Swiss cartoonist Fredy Sigg designed a "cartoon" variant of the deck in 1978. In the 2000s, Austrian and German card producers also came up with "face-lifted", modernized designs for the Swiss deck, but these were not widely sold in Switzerland. AG Müller since its acquisition by Cartamundi in 2000 also came up with various "modernized" variants, sold under the name "Jass Plus". Since 2007, AG Müller has been selling Swiss suited poker sets with 52 cards plus three Jokers. These cards are wider than Jass ones and the pip cards are different; roses and acorns are no longer connected by vines and the shields are uniformly the same. They also use English corner indices for the face cards which meant giving the Queen index "Q" for the male Obers.

William Tell as Eicheln Ober in the Hungarian deck

There is also a "Swiss themed" deck of cards, in which each of the eight Ober and Under cards represents a character from Friedrich Schiller's Wilhelm Tell (William Tell himself is Eichel-Ober). This deck was designed as a means to avoid censorship at the time of the Hungarian uprising against Habsburg Austria in 1827; instead of depicting the actual leaders of the uprising, the designers settled for the characters of Schiller's drama, which after all was also about a revolt against the Habsburgs. This deck is today known in parts of Central Europe but it is not in use in Switzerland.