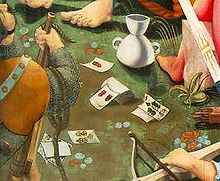 Detail from the Herrenberger Altar

Karnöffel is a trick-taking card game which probably came from the upper-German language area in Europe in the first quarter of the 15th century. It first appeared listed in a municipal ordinance of Nördlingen, Bavaria, in 1426 among the games that could be lawfully played at the annual city fête. This makes the game the oldest identifiable European card game in the history of playing cards.

The earliest substantial reference to Karnöffel is a poem by Meissner, discovered by Dr. Rudolf von Leyden, written in or before 1450. The word means inguinal hernia.

Karnöffel had a suit in which some cards had a higher priority than cards in other suits, which indicates that it might be a possible precursor to the trump suit of Tarot. Karnöffel utilizes a deck of 48 cards, Aces having been removed from German and Swiss playing cards during the 14th or early 15th century.

A derivative of the game is still played around Stans and in the Engelberg valley in Canton Nidwalden in Switzerland under the name Kaisern, Kaiserspiel, or Kaiserjass, though it's not a true variety of Jass. It is a five-card partnership game of which each deal is won by the first side to win three tricks.

Karnöffel can be played with a standard 52-card deck, omitting the Aces. The German decks have Obers and Unters as court cards instead of Queens and Jacks. If playing with a French suited deck use the Queen in place of the Ober and the Jack as the Unter. In plain suits the cards rank in the usual descending order of King, Queen, Jack, 10, 9, 8, 7, 6, 5, 4, 3, 2. It can be played by two to eight players. If played by four, six, or eight players, partnerships or teams can be formed by drawing cards from the deck. In teams, one member is chosen as the director. Directors and partners can look at other cards from their side before play and decide if they should surrender. Unlimited table-talk is allowed and advice may be given to each other on play. Whoever drew the lowest card is the dealer.

Five cards are dealt to each player, one at a time, clockwise. The first card is dealt face up, the others face down. The lowest-ranking face-up card determines the "trumps" for that round. In case of a tie for low card the suit of the first of the low cards dealt is trump. Once trump is determined the players turn their card over then 4 more cards are dealt (a total of 5 cards).

The player to the left of the dealer leads any card but the "Devil" (7 of trumps) to the first trick. Each other player in clockwise order plays any card, there is no requirement to follow suit as in other games. The player of the highest card of the suit led, or of the highest "trump" if any are played, wins the trick and leads to the following trick.

Continue until one side has won three tricks or all cards have been played. The team winning a majority of the five tricks wins the round and the player who led to the first trick then deals for the next round.