Playing cards (Spielkarten) entered German speaking lands around the late 14th century. Here, the cards developed into new suits of Acorns (Eichel), Leaves (Grün or Blatt), Hearts (Herz) and Bells (Schelle). The Swiss-Germans use the closely related Swiss suits. Cards of these types spread throughout Central Europe into countries that were once under German or Austrian control (Hungary, Slovenia, Slovakia, the Czech Republic, Croatia, Transylvania, Vojvodina, South Tyrol, Transcarpathia, and parts of Poland). Despite the name, the German deck is not well known all over these countries including parts of Germany itself as they are undergoing strong competition from French suited decks. Traditional card games in which the German suit is used include Skat, Schafkopf and Doppelkopf.

German suited decks tend to have fewer cards than either the French, Spanish, or Italian sets. The typical northern German pack goes from ranks 7, 8, 9, 10, Under Knave (Unter), Over Knave (Ober), King (König), and Ace (Ass) for a total of 32 cards. Southern patterns have 36 cards by including the 6. In Austria and South Tyrol, the 6 of Bells is known as the Weli which is often used as a wild card. The Weli first appeared around 1855 in the discontinued Tyrolean pattern and later the Salzburger and Tell patterns. With the exception of the New Altenburger pattern, all cards with the rank of 10 include the Roman numeral X on the top center of the card.

The ace in German and Swiss German sets have a peculiar history. Aces disappeared from German decks during the 15th century. When the ace was promoted above the King in French packs during the 16th century, the deuce did so as well in Germany leading to the conflation of the ace and deuce. This is why in some sets the ace depicts two pips and is also called a daus (deuce). Confusion is avoided when the 7 or 6 became the lowest card in most packs during the 17th and 18th centuries. Players also avoid confusion by alternatively calling the Ace/Deuce a sau (sow).

Many regions have their own pattern (Bild) which features their own unique artwork or number of cards.

Northern patterns have 32 cards and are used to play Skat. The two traditional patterns are the Prussian-Silesian and Saxon patterns where only pip cards have corner indices. In northern patterns, the acorns are red. They have been marginalized by the New Altenburger or "German pattern" pattern created during the former German Democratic Republic which added corner indices to every card but the Aces. True to communist fashion, the Kings and Obers are depicted as pompous and arrogant while the Unters are heroic working class men.

The 36 card Modern Bavarian, Franconian, and Salzburger patterns are descended from the Old Bavarian pattern. Since the 1980s, Italian manufacturers have included 5s into their Salzburger decks to allow the German speaking South Tyroleans to play Italian card games that require 40 cards with suits they are more familiar with. Salzburger decks also has the "Weli". The Bohemian (or Prague) pattern is also descended from the Old Bavarian but has only 32 cards like the northern ones. The Salzburger and Bohemian patterns are also not reversible and lack corner indices. Most games require only 32 cards by excluding the 6s such as Schafkopf. Games that require the full deck include Jass and Tarock.

The Württemberg pattern dates from the late nineteenth century and carries many unique features. The Obers are on horseback like their Knight equivalents in Latin decks. Face cards were inspired by the Cego cards used in nearby Baden. The cards are most often sold in a doubled pack of 48 cards (24 unique cards duplicated). The duplicated cards (7, 10, U, O, K, A of each suit) are used to play Doppelkopf, Pinochle, and Gaigel. They used to be produced in 36 card packs (with every card unique) like other southern patterns. Pressman Toy has published a 48 card version where ever card is unique to play Karnöffel. It is mislabeled as the Bavarian pattern.

William Tell deck (Austrian version); notice the "Weli" on the 6 of Bells.

The William Tell pattern is popular in the former Austro-Hungarian Empire, especially in Hungary. The Ober and Unter cards depict William Tell and other characters from Friedrich Schiller's Wilhelm Tell (William Tell himself is Eichel-Ober). This deck was designed as a means to avoid censorship at the time of the Hungarian opposition to Habsburg rule. Instead of depicting the actual leaders of the uprising, the designers settled for the characters of Schiller's drama, which after all was also about a successful revolt against the Habsburgs. When Austrians began producing this deck, they changed two of the characters. The Aces depict the four seasons which are also somewhat different in the Austrian and Hungarian versions. The Czech version follows the Austrian version but doesn't label the characters or the seasons. The Kings don't represent anyone in particular and are shown seated on horses. Except for the Aces, all pip cards have Roman numerals. The suit symbols are also slightly different, most notably the leaves are now half yellow and ends with three tips. They come in packs of 32, 33 (with the Weli), or 36 cards. 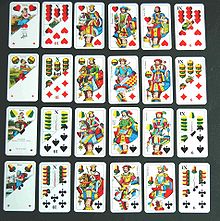 After German reunification, two compromise decks were created to help players on both sides who were used to different suits. The Kongress pattern split cards diagonally with one half using the pattern with French suits and the other half using the pattern with German suits. This is not unique to Germany as similar split decks are found in Austria and Switzerland as well.