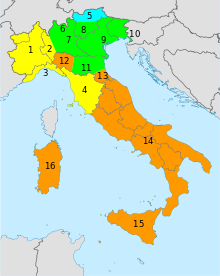 Regional patterns in Italy; Green is Italian, Blue is German, Yellow is French, and Orange is Spanish

Playing cards (carte da gioco) have been in Italy since the 14th century. As Latin suited cards, they use swords (spade), cups (coppe), coins (denari), and clubs (bastoni). All Italian suited decks have three face cards per suit; the fante (Knave), cavallo (Knight), and re (King). Italian suited cards normally only refer to cards originating from northeastern Italy around the former Republic of Venice as the rest of Italy uses Spanish suits, French suits or German suits. Until the late 19th century, Italy was composed of many smaller independent states or under foreign occupation which led to the development of various regional patterns. Italian suited cards are largely confined to northern Italy and pockets in Switzerland. Popular games include Scopa, Briscola, Tressette, Bestia, and Sette e mezzo.

Playing cards arrived from Mamluk Egypt during the 14th century. Mamluk cards used cups, coins, swords, and polo-sticks. As polo was an obscure sport, Italians changed them into batons. Italy was a collection of small states so each region developed its own variations. Southern Italy was under strong Spanish influence so their cards closely resemble the ones in Spain. Northern Italian suits used curved swords instead of straight ones and their clubs are ceremonial batons instead of cudgels. Swords and clubs also intersect unlike their Spanish counterparts.

Tarot cards were invented during the early 15th century in northern Italy as a permanent suit of trumps (trionfi). As they were more expensive, the lower classes preferred smaller decks which led to manufacturers shedding 8s, 9s, and 10s to create the prevalent 40 card decks. 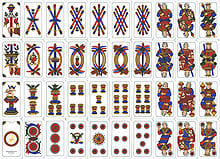 These three patterns are closely related, having been formed in close proximity to one another. The Trentine pattern is believed to be the oldest surviving Italian pattern and the origin of the Bresciane and Bergamasche patterns.

Trentine cards are sold in either packs of 40 or 52. The smaller deck is missing the 8s through 10s. The larger deck sometimes come with a Joker. All the Kings sit on thrones and the cards are not reversible. The cards utilize only five colors: black, white, red, blue, and yellow which has led to face cards with blue, yellow, and red hair. Trentine pip cards also have numerals though not always in the corner. These cards are wider than the two below.

The Bresciane deck comes only in sets of 52 cards and are not reversible. The kings are shown standing and all the characters have yellow hair. The cards are slightly more colorful, adding green and brown. Only the 7 and 9 of Swords are numbered and they are found within the pips.

The Bergamasche pattern comes in decks of 40 cards only. They are reversible or double-headed, meaning they can be turned upside down. None of the pip cards are numbered and color is added to the faces of the characters.

The Trevigiane deck, also known as the Venetian or Veneto deck, comes in sets of 40 or 52. The smaller set is missing ranks 8 through 10 while the larger often includes two Jokers to bump it up to 54 cards. The face cards are reversible and the pip cards have corner indices. Early forms of this pattern may have been the source of the Trappola decks that were produced in Central Europe before the Cold War.

Closely related is the Triestine pack which was once available in 52 card sets but now only 40 card decks are sold. Though ranks 8 through 10 were removed, the face cards are still numbered 11 through 13. The face cards are reversible with each half separated by white box that labels the card, a feature usually found only in tarot decks. This is the only deck in which both face cards and pip cards are numbered though not always in the corner. 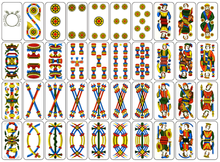 Cards from Bologna are sold in two sets, the 40 card Primiera Bolognese set and the 62 card Tarocco Bolognese set. The Primiera set is used for standard games like Primero while the Tarocco set is used to play Tarocchini. The Primiera set goes from ranks Ace to 7, Knave, Knight, and King. The Tarocco set goes from ranks 6 to 10, Knave, Knight, Queen, King, and Ace. All ranks that they share in common appear very similar but are not identical.

The Tarocco set's trump cards are also different from other tarot decks. While it has 21 trump cards, only trumps 5 to 16 are numbered and the bottom four trumps are considered equal. The Magician is an unnumbered trump and ranks below the bottom four. All the face cards and trumps are reversible. Tarocco sets by Dal Negro includes two Jokers that aren't used in any tarocchini games.

The Tarocco Piemontese is a 78-card tarot deck from Piedmont and the most popular tarot playing deck in Italy. It is derived from the Tarot de Marseille. Unlike the traditional Piemontesi deck which uses French suits, the tarot deck uses Italian suits. It uses a 1 instead of an Ace and the Fool is numbered as 0 despite not being a trump card. Trumps and most pip cards have indices in modern Arabic numerals (for trumps, cups, and coins) or Roman numerals (for swords and batons). The face cards and trumps are reversible. Dal Negro's decks include two Jokers that aren't used for tarot games.

Swiss 1JJ is a 78-card tarot set descended from the Tarot de Marseille and is still used in pockets of Switzerland. Despite having Italian suits, the trumps are labelled in French or German. They are not reversible and the trumps and pip cards use Roman numeral indexing. They are used by the Romansh to play Troccas and by Swiss Germans to play Troggu.