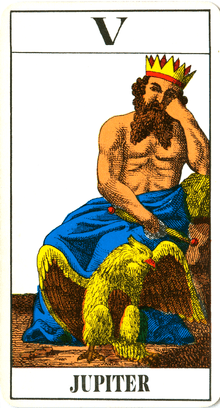 The Swiss 1JJ Tarot deck is a 78-card deck used for the tarot card games Troccas and Troggu and also for divination.

The deck is derived from the Tarot de Besançon which itself comes from the Tarot de Marseille. It is an Italian suited pack which substitutes the figures of Juno and Jupiter in place of the Popess and Pope of the Tarot de Marseille. The cards are not reversible and both the trumps and pip cards use Roman numeral indexing. The lack of modern features like reversibility, corner indices, and Arabic numerals has made this deck unpopular for tarot gamers outside of their native communities. For example, the French-speaking Swiss (Romands) prefer using the Tarot Nouveau to play French Tarot. It is still the official deck for Troccas tournaments.

Troccas players use the French language version but refer to their cards with their Romansh (Rhæto-Romanic) nicknames. Troggu players use the German version. The English version uses cartomantic terminology. The names of the trump cards are as follows: