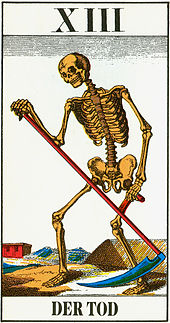 Death, the 13th trump in a German captioned 1JJ deck

Troccas is a member of the Tarot family of card games. It is played in the Romansh speaking part of the canton Grisons of Switzerland. It is not known exactly how this game entered Switzerland but it is generally thought to have arrived from Italy during the 17th century.

Troccas decks are sometimes called "1JJ" or "Jupiter and Juno" decks because they substitute Jupiter and Juno for the Pope and Papess of the Tarot of Marseilles. The deck's captions are usually in French or German, but a version with English captions has been published.

1JJ cards are referred to in play by their Romansh (Rhæto-Romanic) names, but bear legends in French or German.

At end of play, cards are counted in groups of four, subtracting three points for each group. Dealer (in Romansh, scartist) will have two odd cards, counting for combined value, minus one point. The full deck totals 72 points, and cards are worth the following: kings and honours (1 and 21 of trump, and the excuse) five, queens four, cavaliers three, jacks two, everything else one.

Prior to play, each player cuts for trump. The two highest and the two lowest form partnerships.

Each player is given nineteen cards; Dealer takes the last two, giving him a hand of twenty-two cards. The last card dealt to each player is traditionally turned up. Usually, the cards are dealt in packets of six, six, and seven, with dealer taking the last nine.

Dealer discards two cards, which may not include Kings or Honours (the I or XXI of trump, as well as the excuse [il narr]). Other trumps may be discarded, though this is inadvisable. A good strategy is to eliminate a suit in which one is short, to allow trumping when this suit comes up in play; if this is impossible, it is advisable to discard the lowest two cards of a suit in which one is long.

The Excuse beats nothing "but a drum" (generally the figure depicted on the Excuse is that of a musician). It also, however, can not be beaten. If the side that wins the trick did not play the Excuse, they must return it to their opponents, in exchange for a one-point card.

Players win or lose game points equal to the card points over or below thirty-six; in practice, each point generally corresponds to a small stake.