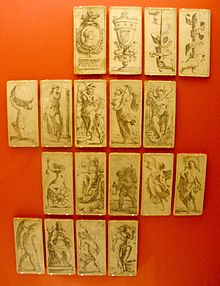 The Tarocco Bolognese is a tarot deck found in Bologna and is used to play tarocchini. It is a 62 card Italian suited deck which influenced the development of the Tarocco Siciliano and the obsolete Minchiate deck.

This is one of the oldest decks in continual use, dating back to at least the 15th century, though it has gone through modifications. First, the pip cards from 2 to 5 had been dropped from each suit since the early 16th century bringing down the number of cards from 78 to the present 62. The imperial and papal trumps, having been of equal rank, were converted to four moors, two of which are identical, during the early 18th century. Later in that century the face cards and trumps became reversible and most trumps added Arabic numerals. None of the cards are labelled and only trumps 5 to 16 are numbered. The hierarchy of cards in the long suits (swords and batons) goes from King (highest), Queen, Knight, Knave, 10 to 6, and Ace (lowest). For cups and coins it is King (highest), Queen, Knight, Knave, Ace, and 6 to 10 (lowest).

The trump cards are as follows: