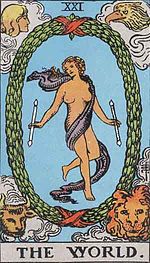 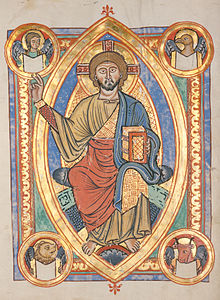 Christ in Majesty is surrounded by the animal emblems representing the four evangelists in a German manuscript.

A naked woman hovers or dances above the Earth holding a staff in each hand, surrounded by a green wreath, being watched by various creatures. In older decks, these are usually a human face or head, a lion, an ox, and an eagle, the symbols of the four Evangelists. The four figures in the corners of the card are also referenced in the Book of Revelation, 4:7, where the throne of God is described: "And the first beast was like a lion, and the second beast like a calf, and the third beast had a face as a man, and the fourth beast was like a flying eagle."

Later decks avoid such overt Christian symbolism, or ignore it altogether, choosing to explain these observers as representatives of the natural world, or the kingdom of beasts. According to astrological tradition, the Lion is Leo, a fire sign; the Bull or calf is Taurus, an earth sign; the Man is Aquarius, an air sign; and the Eagle is Scorpio, a water sign. These signs also represent the classical four elements.

In some decks the wreath is an ouroborous biting its own tail. In the Thoth Tarot designed by Aleister Crowley, this card is called "The Universe."

The World represents an ending to a cycle of life, a pause in life before the next big cycle beginning with the fool. The figure is at once male and female, above and below, suspended between the heavens and the earth. It is completeness. It is also said to represent cosmic consciousness; the potential of perfect union with the One Power of the universe. It tells us full happiness is also to give back to the world, sharing what we have learned or gained.

According to Robert M. Place in his book The Tarot, the four beasts on the World card represent the fourfold structure of the physical world, which frames the sacred center of the world, a place where the divine can manifest. Sophia, meaning Prudence or Wisdom (the dancing woman in the center), is spirit or the sacred center, the fifth element. It is the fourth of the Cardinal virtues in the Tarot. The lady in the center is thus a symbol of the goal of mystical seekers. In some older decks, this central figure is Christ, in others it is Hermes. Whenever it comes up, this card represents what is truly desired.

The main antagonist of the first and third series of JoJo's Bizarre Adventure, Dio, is the user of the The World, a supernatural being representative of the tarot card.