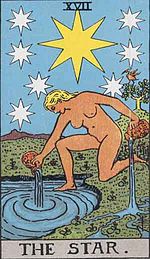 The Star (XVII) from the Rider-Waite deck

The Star (XVII) is the seventeenth trump or Major Arcana card in most traditional Tarot decks. It is used in game playing as well as in divination.