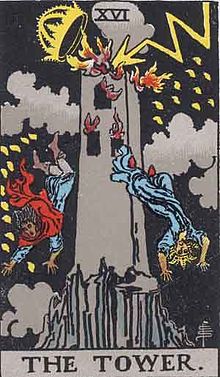 The Tower in the 1909 Rider-Waite tarot deck.

The Tower (XVI) (most common modern name) is the 16th trump or Major Arcana card in most Italian-suited Tarot decks. It is used in game playing as well as in divination. 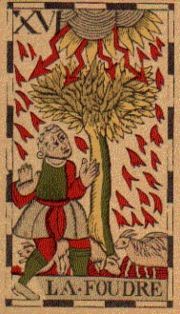 The Belgian Tarot depicts a tree struck by lightning.

This card follows immediately after The Devil in all Tarots that contain it, and is associated with sudden, disruptive, and potentially destructive change. Some early, painted decks, such as the Visconti-Sforza tarot, do not contain it, and some Tarot variants used for game playing omit it.

Early printed decks that preserve all their cards do feature The Tower. In these decks the card bears a number of different names and designs. In the Minchiate deck, the image usually shown is of two nude or scantily clad people fleeing the open door of what appears to be a burning building. In some Belgian tarots and the 17th century tarot of Jacques Viéville, the card is called La Foudre or La Fouldre, ("The Lightning") and depicts a tree being struck by lightning. In the Tarot of Paris (17th century), the image shown is of the Devil beating his drums, before what appears to be the mouth of Hell; the card still is called La Fouldre. The Tarot of Marseilles merges these two concepts, and depicts a burning tower being struck by lightning or fire from the sky, its top section dislodged and crumbling. Two men are depicted in mid-fall, against a field of multicolored balls. A. E. Waite's version is based on the Marseilles image, with small tongues of fire in the shape of Hebrew yod letters replacing the balls. 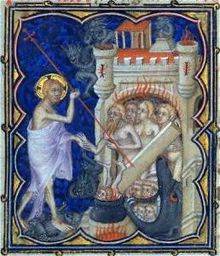 In this manuscript picture of the Harrowing of Hell, Jesus forces open the fiery tower gate of Hell to free the virtuous dead from Limbo. The enactment of this scene in liturgical drama may be one source of the image of the Tower.

The destruction of the tower of Babel is depicted in this Bulgarian manuscript.

A variety of explanations for the images on the card have been attempted. For example, it may be a reference to the biblical story of the Tower of Babel, where God destroys a tower built by mankind to reach Heaven. Alternatively, the Harrowing of Hell was a frequent subject in late medieval liturgical drama, and Hell could be depicted as a great gate knocked asunder by Jesus Christ. The Minchiate version of the deck may represent Adam and Eve's expulsion from the Garden of Eden.

The Tower is commonly interpreted as meaning danger, crisis, destruction, and liberation.