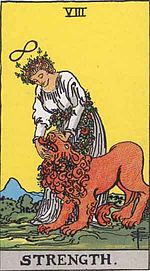 Strength is a Major Arcana Tarot card, and is numbered either XI or VIII, depending on the deck. Historically it was called Fortitude, and in the Thoth Tarot deck it is called Lust. This card is used in game playing as well as in divination. 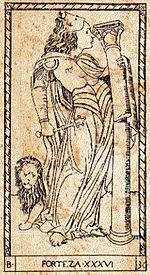 The design of this card is fairly constant across tarot decks. The key characters are that of a woman and a lion, with the woman looking calm and gentle, yet dominant over the lion. Many cards, including that of the Rider-Waite-Smith deck, have the woman clasping the lion's jaws. Another feature of the RWS deck is a lemniscate (a kind of geometric form) hovering over the woman's head. Other decks have the woman sitting upon the lion, or merely with one hand upon it. Some decks feature just one of the characters; flowers are often presented on this card.

The Strength card was originally named Fortitude, and accompanies two of the other cardinal virtues in the Major Arcana: Temperance and Justice (the Darkana tarot deck also includes Prudence in place of Judgement). The meaning of Fortitude was different from the interpretation of the card: it meant moderation in attitudes toward pain and danger, with neither being avoided at all costs, nor actively wanted.

The older decks had two competing symbolisms: one featured a woman holding or breaking a stone pillar, and the other featured a person, either male or female, subduing a lion. This Tarocchi del Mantegna card (image, above), made in Ferrara around 1470, illustrates both. The modern woman-and-lion symbolism most likely evolved from a merging of the two earlier ones.

Strength is traditionally the eleventh card and Justice the eighth, but the influential Rider-Waite-Smith deck switched the position of these two cards in order to make them a better fit with the astrological correspondences worked out by the Hermetic Order of the Golden Dawn, under which the eighth card is associated with Leo and the eleventh with Libra. Today many decks use this numbering, particularly in the English-speaking world. Both placements are considered valid.