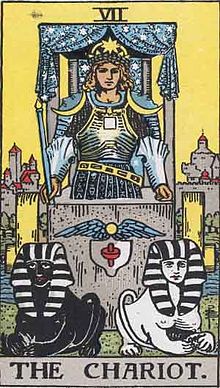 The Chariot (VII) is the seventh trump or Major Arcana card in most traditional Tarot decks. It is used in game playing as well as in divination.

A powerful, princely figure sits in a swift chariot, pulled usually by two sphinxes or horses. There is often a black and white motif, for example one of the steeds may be black and the other white. The figure may be crowned or helmeted, and is winged in some representations. He or she may hold a sword or wand, or other masculine symbol. The Thoth Tarot deck has the figure controlling four different animals, representing the four elements.

It has been suggested the square on the charioteer's chest is a representation of the earth tattva.