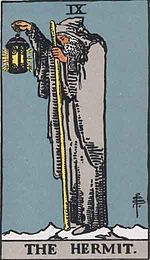 The Hermit (IX) is the ninth trump or Major Arcana card in most traditional Tarot decks. It is used in game playing as well as in divination.

The Waite version of the card shows an old man carrying a staff in one hand and a lit lantern containing a six-pointed star in the other. In the background is a wasteland. Just beyond the wasteland is a mountain range.

In some decks it is also called Le Moine ("The Monk") or Time or The Sage.

In the Vikings Tarot, the Hermit is Heimdall living at the edge of Asgard, standing ready with Gjallarhorn watching for the signs of the coming of Ragnarok.

In the X/1999 Tarot version made by CLAMP, The Hermit is Satsuki Yatouji.

In the Mythic Tarot deck, the Hermit is depicted by Cronus.

In the Sacred Circle Tarot, the Hermit is the Shaman.

In the Psycards alternative Tarot deck, the Hermit is the Sage.