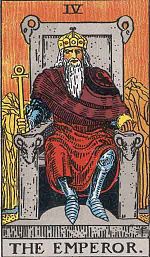 The Emperor (IV) is the fourth trump or Major Arcana card in traditional Tarot decks. It is used in game playing as well as in divination.

The Emperor sits on a ram-adorned throne, a symbol of Mars (mythology). He holds an Ankh scepter in his right hand, and a globe, symbol of domination, in his left. The Emperor sits atop a stark, barren mountain, a sign of "sterility of regulation, and unyielding power." He symbolizes the top of the secular hierarchy, the ultimate male ego. The Emperor is the absolute ruler of the world.