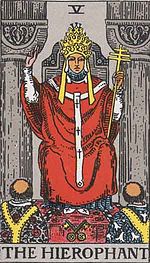 The Hierophant (V), in some decks named The Pope, is the fifth trump or Major Arcana card in most traditional Tarot decks. It is used in game playing as well as in divination.

In many modern packs, the Hierophant is represented with his right hand raised in what is known esoterically as the blessing or benediction, with two fingers pointing skyward and two pointing down, thus forming a bridge between Heaven and Earth reminiscent of that formed by the body of The Hanged Man. The Hierophant is thus a true “pontiff”, in that he is the builder of the bridge between deity and humanity. In his left hand he held a triple cross. The Hierophant is typically male, even in decks that take a feminist view of the Tarot, such as the Motherpeace Tarot. The Hierophant was also known as "The Teacher of Wisdom."

In most iconographic depictions, the Hierophant is seen seated on a throne between two pillars symbolizing Law and Liberty or obedience and disobedience, according to different interpretations. He wears a triple crown, and the keys to Heaven are at his feet. Sometimes he is shown with worshippers, as his alternate title is the Pope or, sometimes, Jupiter. The card is also known as "The High Priest," as a counterpart to "The High Priestess" (which itself is also sometimes known as "The Popess," as counterpart to "The Pope").

The papacy was not just a religious force, but was a political and military force as well. When the tarot was invented, the Pope controlled a large portion of central Italy. Renaissance culture did not question the abstract ideal of the Pope as God's human representative on Earth. In Tarot of Marseilles, he wears a red cape and a blue robe, in contrast to The Papess, who wears a blue cape and blue robe.

The more commonly encountered modern name "Hierophant" is due to Antoine Court de Gébelin. According to de Gebelin, "hierophant" was the title of the chief priest in the Eleusinian mysteries (an ancient Greek ritual).

In Swiss Troccas decks, he is depicted as Jupiter, the Roman King of the Gods.

In the "Flemish Deck" by Vandenborre (c.1750-1760), the High Priest is replaced with Bacus (Bacchus). It shows the God of Wine with his head and waist wreathed in grape leaves. He is seated astride a tapped cask of wine while he drinks from a wine bottle in his left hand.

In the Vikings Tarot the Hierophant is Odin with his two ravens, Hugin and Munin, and his two wolves, Geri and Freki.

In the X/1999 Tarot version made by CLAMP, The Hierophant is Aoki Seiichirou.

In the Lord of the Rings Tarot Deck, Gandalf the White is the Hierophant.

In Howard Rodway's Tarot Of The Old Path the Hierophant is called The High Priest. He sits on a golden throne accompanied by the heads of a ram and an elephant, along with a raven in the foreground.

In the Tarot of the Saints, the Hierophant is St. Peter who is also considered the first pope.

In the Mythic Tarot deck, the Hierophant is depicted as Chiron, the learned centaur.