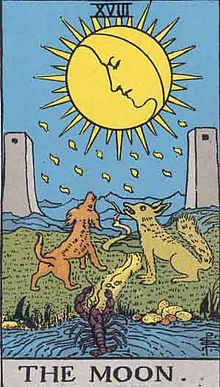 The Moon (XVIII) is the eighteenth trump or Major Arcana card in most traditional Tarot decks. It is used in game playing as well as in divination. 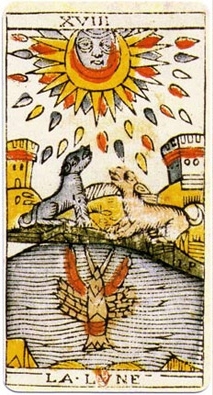 An original card from the tarot deck of Jean Dodal of Lyon, a classic "Tarot of Marseilles" deck. The deck dates from 1701-1715.

The card depicts a night scene. Two large, foreboding pillars are shown. A wolf and a domesticated dog howl at the moon. A crayfish appears in the water. The Moon is "shedding the moisture of fertilizing dew in great drops"., 18 in number in the Rider-Waite deck and are all Yodh-shaped. The figure in the moon is frowning, reflecting displeasure.

According to Waite's The Pictorial Key to the Tarot, the card represents life of the imagination apart from life of the spirit. The dog and wolf are the fears of the natural mind in the presence of that place of exit, when there is only reflected light to guide it. This reference is a key to another form of symbolism. The intellectual light is a mere reflection and beyond it is the unknown mystery which it cannot reveal.

Key 18 The Moon "The moon in three phases watches over the landscape. From the pool of Cosmic Mind stuff in the foreground, a crayfish appears, symbolizing the early stages of conscious unfoldment. The wolf is nature's untamed creation; the dog is the result of adaptation to life with man. In the back-ground, halfway up the path, are the twin towers Man has erected to protect himself from his hostile environment. The Moon will lead him along the rugged path, past the towers, to the final heights of attainment, if he will be guided by her reflected light and listen to the voice of the subconscious. Once again, the falling drops are yods, representing the,descent of the Life-force from above into the material existence. This is the key of sleep and dreams. The Moon's three phases of intuition concern body, mind and spirit. The Moon Mother watches over the birth of Spirit into material manifestation. The number 18 consists of the digits 1 and 8, which add up to 9, thus becoming the second 9 and indicating the second initiation, The Hermit was the first 9 on the path. The Fool is still on his journey - learning, falling back, and then again advancing."