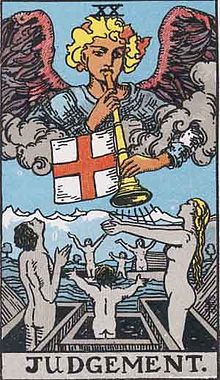 Judgement (XX), or in some decks spelled Judgment, is a Tarot card, part of the Major Arcana suit usually comprising 22 cards.

The scene is modeled after the Christian Resurrection before the Last Judgment. An angel, possibly Gabriel, is depicted blowing a great trumpet, from which hangs a white flag bearing a red cross. A group of humans (man, woman, and child) of grayish complexion stand, arms spread, looking up at the angel in awe. The people are apparently emerging from crypts or graves. There are huge mountains or tidal waves in the background. These may be a reference to the sea giving up its dead on the day of judgment, as described in the Book of Revelation.