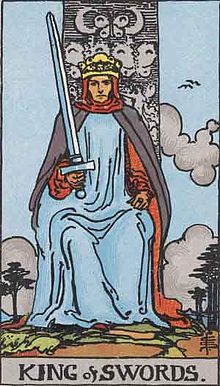 The King of Swords card from the Rider-Waite tarot deck

Each Minor Arcana card in a suit is numbered one (ace) to ten, except for the court cards (or courts) - page, knight, queen, and king - which are comparable to face cards. In one variation, princess and prince cards replace the page and knight cards. Some Italian decks add two more court cards: the maid and the mounted lady.

In divinatory, esoteric and occult tarot, the Minor Arcana are believed to represent relatively mundane features of life. The court cards represent the people we meet.

Each suit also has distinctive characteristics and connotations currently thought to be as follows:

However, the original divinatory correspondences of the Latin and French suits as conceived by Etteilla for his decks which were followed by S.L. MacGregor Mathers (Golden Dawn Liber T) and A.E. Waite (Rider-Waite-Smith deck) were

The following cards are from the Rider-Waite tarot deck, the most popular tarot deck amongst English-speakers; they are divided by suit, and arranged in ascending order of face value.