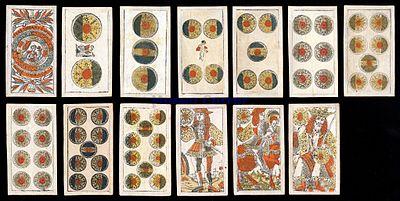 Suit of Coins ("Denari") from an 18th-century Venetian deck

The Suit of Coins is one of the four suits used in Latin suited playing cards, such as Spanish, Italian and tarot decks. It corresponds to the Suit of Diamonds in standard decks.

In tarot, Coins or Pentacles is part of what is called the "Minor Arcana". Like the other tarot suits, it contains fourteen cards: ace (one), two through ten, page, knight, queen and king.

The suit represents the Third Estate (town-dwellers). Tarot cards are used throughout much of Europe to play Tarot card games. In English-speaking countries, where the games are largely unknown, Tarot cards came to be utilized primarily for divinatory purposes.

In occult and divinatory usage the suit is connected with the classical element of Earth, the physical body and possessions or wealth. Coins as a Latin suit represent the feudal class of traders, and therefore to worldly matters in general. Associated physical characteristics include dark hair and eyes, dark complexion, and sturdy build.

Cards in the suit of coins

In French-language decks, the suit is called Deniers ("silver coins"). The picture cards are Valet (Page), Chevalier (Horseman or Knight), Reine (Queen), and Roi (King). This suit was later changed to Diamonds.

German and Swiss decks use round Schellen ("Hawk Bells") instead.