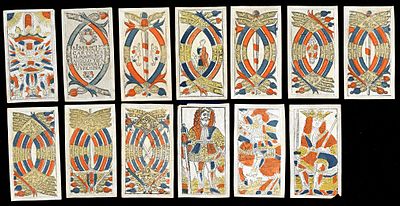 Suit of Swords ("Spade") from an 18th-century Venetian deck

The Suit of Swords is used in Latin suited playing cards, such Spanish, Italian and tarot decks. It corresponds to the Suit of Spades in standard decks.

The suit represents the Second Estate (The Nobles).

In tarot, swords correspond to the element of Air, and as such signifies freedom but also quick change. The Swords suit also traditionally represented the military, which implies strength, power and authority, but also responsibility, violence and suffering.