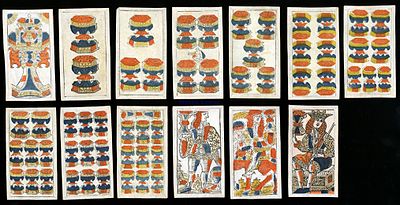 Suit of Cups ("Coppe") from an 18th-century Venetian deck

The Suit of Cups or Suit of Goblets is one of the four suits of Latin-suited playing cards. These are used in Spain ("Copas"), Italy ("Coppe") and in tarot. The suit of hearts is derived from the suit of cups. These are sometimes referred to as chalices as well as cups.

In tarot, the element of cups is water, and the suit of cups pertains to situations and events of an emotional nature. As such, when the tarot is used in divination, many cups signify an emotional issue or love situation, or some event that affects the querent emotionally. The watery astrological signs are Cancer, Scorpio and Pisces. Additionally, cups were the symbol of the clergy in feudal times, and thus cup cards can also be interpreted as having to do with spiritual or religious matters.

The suit represents the First Estate (the Clergy).

Ace of Cups: Aces always indicate beginnings. Here the ace of cups indicates a new beginning of an emotional nature. It can signify the birth of a child, or the beginning of a love situation that affects us deeply. It is generally a card of happiness, and the beginning of many blessings. A new business, a relationship, success on the path is inevitable.

Two of Cups: Two of any suit indicates duality. Here it indicates two minds and hearts coming together and functioning as one. The card portrays a young man and a woman each bearing a cup, as if presenting it to one another. Above is the red lion of strength and courage.

Three of Cups: The three Graces dance and cavort, each maiden bearing a cup. It indicates a time of merriment and celebration.

Four of Cups: A young man sits under a tree. One thinks of Buddha under the bodhi tree, sitting crosslegged, but this youth is not serene. He seems dissatisfied with the three cups before him. A hand from a cloud offers him a fourth cup, but the youth shows no interest. It indicates a period of ennui and boredom, where nothing seems to be satisfying.

Five of Cups: A hooded figure with bowed head seems to mourn the 3 cups spilled before him. Behind the cloaked figure stand two cups, upright. The 5 of any suit can be considered difficult. Here it indicates hopes that have been dashed, or mourning over something that is lost. The hooded figure remains unaware of the two cups still standing behind - so the situation is not completely hopeless.

Six of Cups: Two youths play in a garden, surrounded by six cups. This card can indicate happy memories, as well as a certain clinging to the past and how things used to be. It can also indicate an invitation or gift coming from someone in your past.

Seven of Cups: A young person sees seven cups among the clouds and visions therein. On one cup is the perfect lover or mate all people idealize. Another cup shows riches, another the cloaked soul of the querent about to be revealed, another castles. Other cups show a red dragon of inflamed passion and emotion, as well as a snake arising from another cup. The card is a caution against over idealizing your situation and getting your head lost among the clouds. Your dreams need a firm foundation in order to take root. Do not build castles in the air and fantasize without taking responsibility for your actions.

Eight of Cups: Eight cups are arranged in a row. A figure leaves these cups behind as if beginning a journey. An indifferent moon looks down upon the traveler. The traveler is in a good situation where there is much promise and much to offer, but chooses to set out for the unknown. It indicates a restlessness and wanderlust as well as overlooking the good we already possess, in the hopes of finding something else.

Nine of Cups: This is known as the "wish" card. A well fed, self-satisfied individual sits with nine cups behind. It indicates a table of plenty and getting everything you desire. It is the wish card, meaning your wish will come true.

Ten of Cups: A husband and wife join arms looking up at the rainbow over their house. Two young children dance. Ten cups are seen among the rainbow. It is a card of happiness, completion of all plans to your satisfaction, and a card of fulfillment and a sense of wholeness. A happy marriage and family life.

Page of Cups: A dreamy youth holds a cup from wherein a fish pokes its head. This indicates a versatile individual, one who have the gift of intuition and insight. The card indicates a youth with a love for the arts, poetry and music and may be very fond of dancing. It indicates ease in ones affairs as well as news of enjoyment and entertainment.

Knight of Cups: A young man on a horse with a winged helmet offers a cup. The card can indicate a sensitive male, unmarried, a suitor who seeks the hand of a lady. He is honest and truthful, as well as is heartfelt. It can also indicate a matter of an emotional nature that is occurring in the querent's life.

Queen of Cups: A queen on her throne at the seaside holds a cup she looks into. She sees visions within. It indicates a woman who has the gift of intuition and is able to offer good advice. She also may harbour a secret she is willing to share with you.

King of Cups: A king holding a scepter floats upon the water. It indicates someone who is kind, even tempered, balanced and wise. He may be a member of the clergy, or a counselor, professor or psychologist, doctor. He is a symbol of quiet strength and is calming and reassurring.

In French-language decks, the suit is called Coupes ("Cups"). The picture cards are Valet (Page), Chevalier (Horseman or Knight), Reine (Queen), and Roi (King). This was later replaced by Hearts.

In Swiss decks the suit is represented by six-lobed Rosen ("Roses").