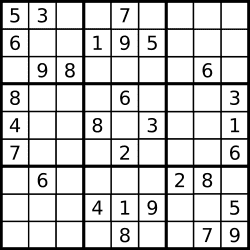 This is a glossary of Sudoku terms and jargon.

This list provides a brief glossary of Sudoku terminology. Items are listed thematically, and usually only once, with a brief description and possibly a link to a detailed description. Links to example usage are provided as in-line numbered references (like [1]). Here the default usage of Sudoku refers to the prominent 9x9 format, as illustrated.

A Sudoku grid has 9 rows, columns and boxes each having 9 cells. The full grid has 81 cells. Cells are commonly called squares, but in technical descriptions the term square is avoided since the boxes and grid are also squares. Boxes are also known as blocks or zones. Three vertically stacked blocks make a stack. Three horizontally connected blocks make a band. A chute is either a band or a stack. A grid has three bands, three stacks and six chutes.

The use of the boxes to partition the grid can be generalized to other equal-sized partition shapes, in which case the sub-areas are known as regions, zones, subgrids, or nonets. See Variants below. In some cases the regions are only equal sized, not equal shaped.

Rows, columns and regions are collectively referred to as units or scopes, of which the grid has 27. The One Rule can then be compactly stated as: "Each digit appears once in each unit".

Size refers to the size of a puzzle or grid. Often a composite row x column designation is used, e.g. size 9x9. In technical discussions size may mean the number of cells, e.g. 81. Since the number of cells in a region must be the side dimension of the square grid, e.g. nine cells per block for a 9x9 grid, it is convenient to just use the region size, e.g. 9.

The classic 9x9 Sudoku format can be generalized to an

NxN row-column grid partitioned into N regions, where each of the N rows, columns and regions have N cells and each of the N digits occur once in each row, column or region.

This accommodates variants by region size and shape, e.g. 6-cell rectangular regions (The NxN Sudoku grid is always square). For prime N, polyomino-shaped regions can be used. The requirement to use equal sized regions, or have the regions cover the grid entirely can also be relaxed.

Du-Sum-Oh puzzles are also known as Latin Squares Puzzles (invented by Mark Thompson), Squiggly Sudoku, Jigsaw Sudoku, Irregular Sudoku, or Geometric Sudoku. These puzzles typically have anywhere from 5 to 9 rows. The number of rows is always equal to the number of columns. The regions are polyominos made of the same number of squares that are in any one row of the puzzle. The irregularity of the regions compensates for the relatively small number of givens.

These use six 2x3 rectangular regions:

Only "One Rule" variant puzzles with simple givens are listed in this section. For variants with other clue mechanisms, see Constraint and clue variants. 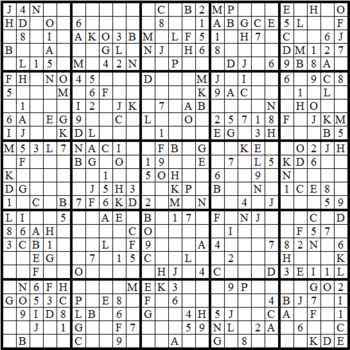 Puzzles with additional constraints on the placement of values including various forms of expressing the constraints (e.g. < > relations, sums, linked cells, etc.).

Main diagonals unique
the cell values along both main diagonals must be unique, see Sudoku X.
Relative digit location
digits use the same relative location within selected regions. The matching cells or regions are often color-coded.

Samunamupure (clue sums)
Regions of various shapes and sizes. The usual constraints of no repeated value in any row, column or region apply. The clues are given as sums of values within regions (e.g. a 4-cell region with sum 10 must consist of values 1,2,3,4 in some order).

The meanings of most of these terms can be extended to region shapes other than blocks. To simplify reading, definitions are given only in terms of blocks or boxes.

Scanning
The process of working through a puzzle to look for or eliminate values.
Cross hatching
Process of elimination that checks rows and columns intersecting a block for a given value to limit the possible locations in the block.
Counting
Process of stepping through the values for a row, column or block to see where they can or cannot be used.
Box line reduction strategy
A form of intersection removal in which candidates which must belong to a line can be ruled out as candidates in a block (or box) that intersects the line in question.
Candidate
Potential value for a cell.
Contingency
A condition limiting the location of a value.
Chain
A sequence of contingencies connected by alternative values.
Higher circuits
Related locations outside the immediate row, column and grid. The locations are related by value contingencies.
Independent clues
A set of clues that cannot be deduced from each other. Often depends on the order of choosing the clues for a given grid.
Intersection removal
When any one number occurs twice or three times in just one unit (or scope) then we can remove that number from the intersection of another unit. For example, if a certain number must occur on a certain line, then occurrences of that number found in a block that intersects this line can be ruled out as candidates. Sometimes called Pointing (or matched) Pairs (or twins)/Triples (triplets) as they point out a candidate that can be removed.
Nishio
What-if method of elimination, where the use of a candidate that would make its other (necessary) placements impossible is eliminated.
The One Rule
Fill in all (blank) cells so that each row, column and box contains the values 1-9. Same as: fill in the grid so that each row, column and box contains the values 1-9 exactly once, without changing the clues.
Single or singleton or lone number
The only candidate in a cell.
Hidden single
A candidate that appears with others, but only once in a given row, column or box.
Locked candidate
A candidate limited to a row or column within a block.
Naked pair
Two cells in a row, column or block, which together contain only the same two candidates. These candidates can be excluded from other cells in the same row, column or block.
Hidden pair
Two candidates that appear only in two cells in a row, column or block. Other candidates in those two cells can be eliminated.
Trio
Three cells in a unit sharing three numbers exclusively. See "Triples and quads".
Triples and quads
The concepts applied to pairs can also be applied to triples and quads.
X-wing
See N-fish (with N=2).
Swordfish
See N-fish (with N=3).
N-fish
Analogues of hidden pairs/triples/quads for multiple rows and columns. A pattern formed by all candidate cells for some digit in N rows (or columns), that spans only N columns (rows). All other candidates for that digit in those columns (rows) can then be excluded. Names for various N-fish:

Remote Pairs
When a long string of naked pairs that leads around the grid exists, any cells that are in the intersection of the cells at the beginning and the end of the string may not be either of the numbers in the naked pairs, for example, 4 and 7.