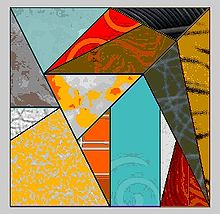 Ostomachion is a dissection puzzle attributed to Archimedes

In the 10th century, Arabic mathematicians used geometric dissections in their commentaries on Euclid's Elements. In the 18th century, Chinese scholar Tai Chen described an elegant dissection for approximating the value of π.

The puzzles saw a major increase in general popularity in the late 19th century when newspapers and magazines began running dissection puzzles. Puzzle creators Sam Loyd in the United States and Henry Dudeney in the United Kingdom were among the most published. Since then, dissection puzzles have been used for entertainment and maths education, and creation of complex dissection puzzles is considered an exercise of geometric principles by mathematicians and math students.

A Tangram puzzle, with its pieces in the rectangular "storage" configuration.

Some types of dissection puzzle are intended to create a large number of different geometric shapes. The tangram is a popular dissection puzzle of this type. The seven pieces can be configured into one of a few home shapes, such as the large square and rectangle that the pieces are often stored in, to any number of smaller squares, triangles, parallelograms, or esoteric shapes and figures. Some geometric forms are easy to create, while others present an extreme challenge. This variability has ensured the puzzle's popularity.