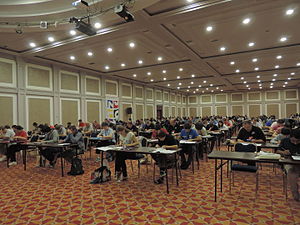 The World Sudoku Championship is an annual international sudoku competition organised by a member of the World Puzzle Federation. The first one was held in Lucca in 2006. National teams are determined by local affiliates of the World Puzzle Federation. The competition typically consists of 50 or more puzzles solved by all competitors over multiple timed rounds, including classic sudoku and variations, followed by a playoff for the top qualifiers to determine a champion. Examples of rounds include the Relay round, where an answer from one puzzle contributes digits to the start of the next sudoku, and the "World Record" round, in which solvers competed to set a Guinness World Record for fastest sudoku solution.

Of the 10 championships held so far, Thomas Snyder of USA (2007, 2008 and 2011) and Jan Mrozowski of Poland (2009, 2010 and 2012) have been the most successful winners with three individual titles each, they succedeed to Jana Tylova of Czech Republic (2006) who won the first individual championship.More recently, Kota Morinishi of Japan is emerging as the strongest player of the latest years by winning 2 individual titles in 2014 and 2015.

Starting from 2011, the event has been held alongside the World Puzzle Championship. The 2015 Championship was held in Sofia, Bulgaria

Starting from 2013, titles have been awarded also for the best players in two age groups, Under 18 and Over 50 years of age.