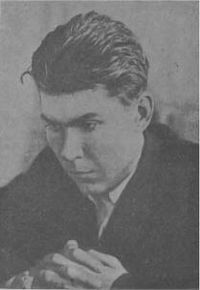 His best International result was at Leningrad 1934 where he shared 2nd place with Peter Romanovsky, behind Botvinnik, and ahead of Max Euwe. In 1935, he won in Göteborg. At Moscow 1935 he tied for 11-14th (Botvinnik and Salo Flohr won). In 1936, he tied for 7-10th in Moscow (José Raúl Capablanca won). Ill-health started to affect him in 1936, and he died from tuberculosis during World War II in Omsk, Siberia.

The game was held in 1934, at the Stalin Motorworks factory in Moscow. The players were Mikhail Botvinnik (USSR champion) and Nikolai Riumin (Moscow champion). The "pieces" were represented in the following way:

The game ended in a draw after 36 moves.